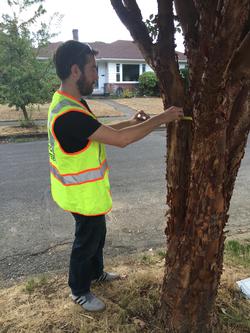 Meet Kyle Lempinen, Inventory volunteer of the year!
In 2010, PP&R Urban Forestry began the Tree Inventory Project to empower neighborhood groups to care for their urban canopy.  This year, 20 neighborhoods partnered with Urban Forestry to inventory their street tree and create action-oriented management plans.  Since 2010, more than 157,000 trees have been identified, measured, and mapped!

Each year, Urban Forestry honors the inventory volunteers with an end of season celebration, and selects one volunteer in particular who has gone above and beyond to support the project to receive the Golden Diameter Tape Award. This year’s recipient is Kyle Lempinen from the Montavilla neighborhood. UF staff interviewed him to find out more about him and his love of trees.

Tell us a little about yourself

I’ve lived in Portland for eight years.  I grew up in the greater Chicago area, and lived on Michigan’s Upper Peninsula before relocating to Portland.  In my years here, I’ve lived in several Portland neighborhoods.  I am studying Geographic Information Science and Technology (GIS&T) at PSU, and am in the final year of my program.

How did you become interested in trees/what inspired you to work with trees?

Growing up in the Midwest, I was always enthralled by the large deciduous broadleaf trees in the older neighborhoods in many of the towns in the region.  More recently, I’ve become concerned about many of these trees being lost to pests and pathogens.  Growing up, I witnessed some of the effects of the Asian Long-horned beetle on maples and other species.  When I visit my hometown (Lake Forest, Il, a Tree City USA town), I am dismayed to see the decimation of ashes and elms that have occurred over the past decade from Emerald Ash Borer and Dutch Elm Disease.

How did you become involved with the Street Tree Inventory?

I learned about an opportunity to do GIS data entry of the inventory data from a classmate who had volunteered during a previous summer.  I was looking to get involved because I knew I would have some extra time this summer (2015).  I contacted Angie DiSalvo and learned of the volunteer-based data collection portion of the Inventory Program from her.  I ended up being trained as a volunteer team leader, and contributed to both the data collection and data entry this summer.  I typically volunteered at the Wednesday afternoon workdays, and came out to Urban Forestry another day each week to help with the data entry.  I also inventoried several areas around my own home on my own as homework assignments.  In addition to my own neighborhood (Montavilla), several nearby neighborhoods (Tabor, North Tabor), as well as ones I had lived in previously (such as Roseway) were also being inventoried this summer.  I was excited to help with the inventory in all of them.

How have you benefitted from volunteering in the Street Tree Inventory?

Overall, it’s been a great learning experience in several ways!  First, I’ve learned so much about tree identification.  Prior to volunteering on the street tree inventory, I hadn’t thought about the many benefits of trees, aside from their aesthetic benefits.  It was an awakening of sorts for me to understand more of their environmental and social benefits.  Also, I was unfamiliar with Urban Forestry and their efforts to educate residents about the benefits of street trees and expanding the urban canopy.

What were your favorite trees you discovered this summer?

All of the trees I inventoried!  I particularly enjoyed ultimately identifying the trees that initially stumped me and others collecting data.  I think mimosa (Albizia julibrissin) and monkey puzzle (Arcaucaria araucana) are really neat and beautiful, and was happy to find a few of them as street trees.  I particularly enjoy the fall colors of ashes (Fraxinus spp).  My favorite tree I encountered was the mature Sassafras across the street from where I live.

What were your favorite tree-related events this past year?

I enjoyed a few of the Wednesday inventory workdays  in particular that were in neighborhoods with a lot of mature, large trees – my first workday in Tabor, and one in Irvington come to mind.  I enjoyed working on a homework section that included the block I live on.  On another homework section in Roseway, I bumped into Nik Desai (a staff neighborhood volunteer coordinator) and his son.  In general I enjoyed interacting with my neighbors and other people I encountered while identifying trees and collecting data.  I also really enjoyed attending the volunteer appreciation dinner held at the Portland Mercado at the end of the season.   I really did not expect to receive the Golden Diameter Tape Award!

What would you like to say to other volunteers, or to anyone interested in the Street Tree Inventory program?

It’s a great way to learn more about the nature that exists within the city.  It caused me to shift the way I think about street trees, and all the work that goes in to developing and maintaining this resource.  I’ve learned more about the city, met many great neighbors, and feel like I’ve built community.

Now that the inventory in your neighborhood is complete, how will you remain involved with street trees around where you live?

I may be moving to a different neighborhood before next summer.  Wherever I am, I hope to work with my immediate neighbors to educate them about tree care, and to encourage them to plant street trees wherever possible.  I think it is especially important to do this with redeveloped properties within the city.  Often trees are planted on these properties by developers, and the residents may not know how to help them get established and properly maintain them.

What are your other tree-related plans for 2016 and beyond?

I hope to continue volunteering with data collection and data entry in the Street Tree Inventory next summer.  Beyond that, I hope to be trained in the Neighborhood Tree Steward Program in 2016.  I should have the time to do this after finishing up my degree.