Aundrea Smith felt a big sense of relief when the old cherry tree in front of her house in the Boise-Eliot neighborhood fell to a chainsaw February 2nd. The tree had been dead since at least 2007, but with other bills to pay the Smith family could not afford to hire an arborist to remove it. With each passing year, Aundrea worried more and more about whether the tree would fall.

Her anxiety was put to rest when she was contacted by volunteers with the Albina Neighborhood Tree Team (ANTT). Jeff Ramsey and Kevin Pozzi, ANTT Leaders, submitted a proposal for $2000 of funding through the new Urban Forestry Neighborhood Stewardship Program, to arrange for the removal of five dead or dangerous street trees and replacement with eight new trees for low-income homeowners in the Boise-Eliot neighborhood. Bids were obtained from private tree care companies; Treecology and Oregon Stump Grinding won the removal and grinding contracts, respectively. The non-profit group Friends of Trees generously agreed to donate the eight replacement trees. 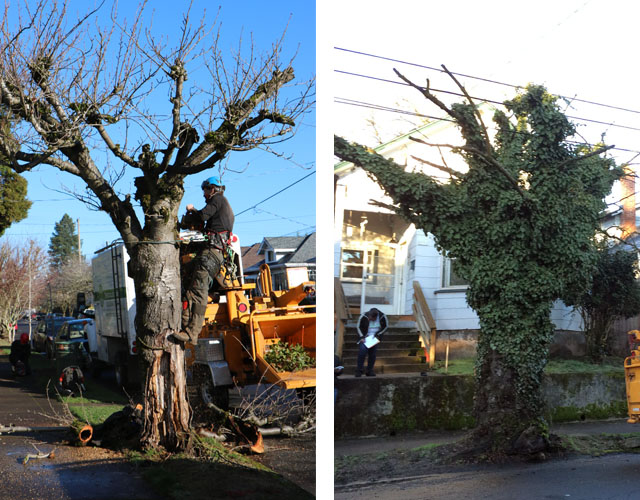 Two of the dead cherry trees prior to removal

Data from Urban Forestry’s 2014 Street Tree Inventory of the Boise-Eliot neighborhood revealed that over 100 large diameter cherry and other street trees in this area were identified as either dead or dying, and due for removal. According to Jeff Ramsey, a Boise-Eliot resident and a volunteer Neighborhood Tree Steward with ANTT, removing the trees and replanting with a diverse mix of new trees emerged as a priority after the group studied the inventory results.

“We know that trees provide great benefits but at the end of their life their removal can be a financial burden,” notes Mr. Ramsey. “We didn’t want the cost to be a burden on low-income homeowners and a barrier preventing removal and replanting.”

ANTT members were pleased with the diversity of the eight replacements. They represent six genera in six distinct families. Three are summer-flowering Muskogee crape myrtles and one is a yellow-flowering magnolia that blooms in spring. There is a rare evergreen- a boxleaf azara from Chile, and a heat and drought-tolerant Chinese pistache. The last two are large shade trees - a native ponderosa pine and a Dutch elm disease-resistant Triumph elm, planted in yards where the planting strip wouldn’t support trees of this size.

Like many other African-American families in northeast Portland, Aundrea Smith’s roots in her neighborhood went back to the 1940s when her grandmother bought a modest one-story home there.

Aundrea now lives in that same house along with her father. He has fond childhood memories of playing in the cherry tree in the 1960s. The pink-flowering tree was most likely one of hundreds planted in the post-war years by African-American organizations interested in improving public amenities in the neighborhood. Cherry trees, however, need room for their large surface roots and big trunks. Boise-Eliot’s narrow planting strips proved a poor match for the trees, many of which lifted sidewalks and pushed out curbs.

“I was real excited when I got the flyer about this project because I had no money to take down the old tree. I was so scared of a storm and the tree falling on someone,” Aundrea says. “This removal project has been a blessing.” 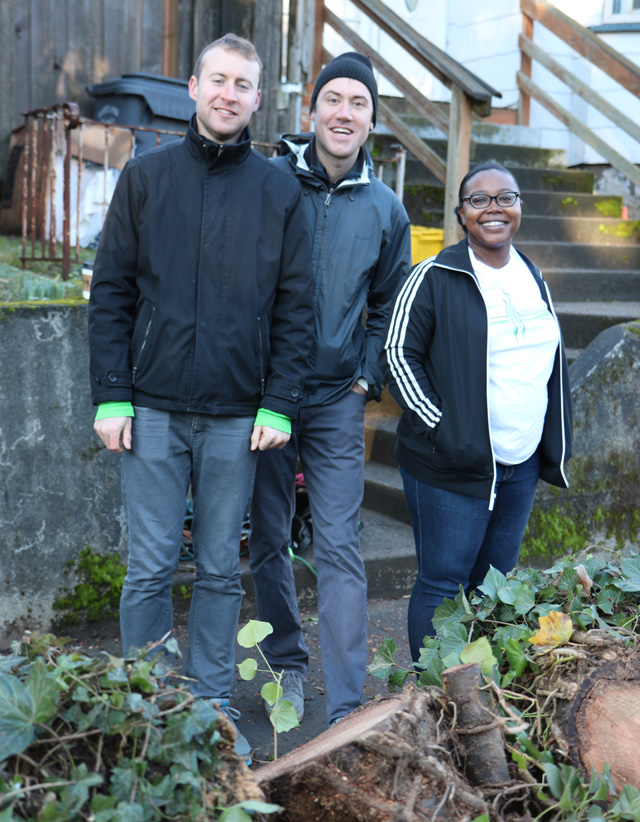 She says she is looking forward to shade in her backyard from her new elm, and to the lavender flowers when her new crape myrtle blooms. Its well-behaved roots and more slender trunk should prove a better fit for her 3’ wide planting strip. Both trees should provide decades of beauty and ecological benefits to the whole neighborhood.