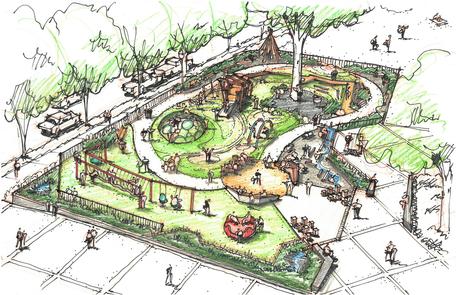 Portland Parks & Recreation (PP&R), Friends of Couch Playground, and Harper’s Playground are pleased to share the final design for the new inclusive playground at Couch Park – accessible by everyone regardless of ability. The improvements at Couch Park (NW 19th Ave & Glisan, adjacent to Portland Public Schools’ Metropolitan Learning Center School, or MLC) are part of the Parks Replacement Bond, overwhelmingly approved by Portland voters in 2014.

Harper’s Playground and Friends of Couch Playground have committed to fundraising an additional $500,000 by the fall of 2016 to supplement the project budget - creating a playground design that is as inclusive as possible.  The community can get involved in this effort by contacting either of those organizations (contact info below).

The improvements at Couch Park include the playground (which replaces the old play area, removed in 2014 due to safety concerns), ADA accessibility improvements in the plaza, and addition of a Portland Loo to replace the aging, existing restroom (which will be repurposed for staff, maintenance, and storage use).

GreenWorks, PC, the Portland landscape architecture firm leading the design team, and PP&R presented the play area’s final design to the community at an open house on February 25, 2016. Community feedback on the design is welcome and may be submitted online through March 8, 2016 via the link at parksreplacementbond.org.

“The commitment by our valued partners, Harper’s Playground and Friends of Couch Playground, and the many businesses and neighbors who have contributed to the effort for inclusive play, shows the power of people coming together,” says Portland Parks Commissioner Amanda Fritz. “The partnerships are leveraging this critical Parks Replacement Bond project to stretch the funding even further, for the benefit of both current and future generations.”

"Harper's Playground is thrilled with the level of partnership we've experienced from Friends of Couch Playground,” says Harper’s Playground Executive Director G Cody QJ Goldberg. “And the overwhelming support our partnership has generated in the community.”

The total project budget (not-to-exceed allocation, for all three elements of playground, plaza, and new Portland Loo) is $2,210,903 of Parks Replacement Bond funds; not including the $500k commitment from partners.

Lauren Nathe’s son, 8th grader Max, was one of two students from MLC School (the other in 6th grade) to have served on the Project Advisory Committee. Additionally, MLC students in 4th-6th grades spent the spring of 2015 studying the Couch Park design process, including during an elective class led by teacher Susan Beaird.

“As a kid who played on the old Couch Park playground for most of my life,” says MLC 8th grader Max Nathe, who participated in the play area design process, “I appreciate being able to represent Portland youth and the MLC students by participating and giving input on the design, for the benefit of current and future kids who will grow up playing on this new playground.”

“As painful as it was to see the old, beloved Couch Park play equipment removed for safety concerns, it is just as gratifying to see neighbors, non-profits and the business community join together,” says Portland Parks & Recreation Director Mike Abbaté. “The new, inclusive play area will allow people of all abilities to enjoy unstructured play, to revel in the outdoors, and to foster a healthy community for all, right in line with our bureau’s mission.”

The community can get involved in this effort by contacting:

More help is needed to close the play gap.

Portland Parks & Recreation remains grateful to Portland voters for the $68 million Parks Replacement Bond, which funds critical needs across the PP&R system. Currently, only four of five people living in Portland have access to a park or natural area within a 15 minute walk. As the bureau strives to close this “play gap”, it anticipates a $248M funding gap for maintenance over the next ten years, and $472M in unfunded growth needs during that period. That adds up to a $720M funding gap over the next decade.

“Despite the long-acknowledged challenges to our Parks system, we have made PP&R a nationally-recognized parks bureau thanks to amazing staff, valuable public-private partnerships, friends and partner groups,” adds Commissioner Fritz. “This project illustrates the grave need for more money to maintain our system.”