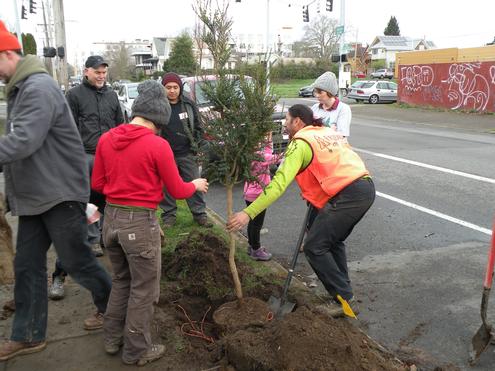 Neighbors and volunteers help plant a boxleaf azara donated by Friends of Trees.

Residents of Boise-Eliot planted scores of cherry trees to beautify their neighborhoods in North Portland, after World War II. Each spring, these trees brought stunning blossoms for all to see. However, as the trees aged, Boise-Eliot's streets became lined with trees in various states of demise. Besides creating a sense of blight rather than beauty, these lifeless, leafless trees no longer provided the many benefits residents would get from a living tree, such as reducing noise, moderating heat and preventing violence and crime.

Portland Parks and Recreation Urban Forestry's 2014 Street Tree Inventory revealed that more than 100 of the neighborhood's cherished cherry trees were dead or dying- due, in part, to the cost of removal and replacement. Additionally, planting of identical trees at the same time, resulted in simultaneous senescence.

The Tree Team, with approval of a city tree inspector, then decided on a diverse mix of eight replacement trees, donated by the non-profit organization, Friends of Trees. Those trees were planted by Tree Team members, Friends of Trees staff and volunteers, on February 13, 2016, as a special Valentine to the neighborhood.

The new trees represent a healthier mix, with varied lifespans. For instance, a ponderosa pine can live for two centuries or more. Other trees planted were chosen because they bloom when nectar is scarce for pollinators, such as winter or summer. Some, like a Chinese pistache, are more tolerant of heat and drought than cherry trees, making them better adapted to climate change. Others, like a Chilean boxleaf azara, are evergreen and better suited than deciduous trees for intercepting and slowing runoff from Portland's winter rains.

Homeowners in the area, like Aundrea Smith, are relieved that dangerous cherry trees that stood lifeless for so long were finally removed. She says she looks forward to admiring the lavendar flowers of her two new Muskogee crape myrtles for many summers to come. 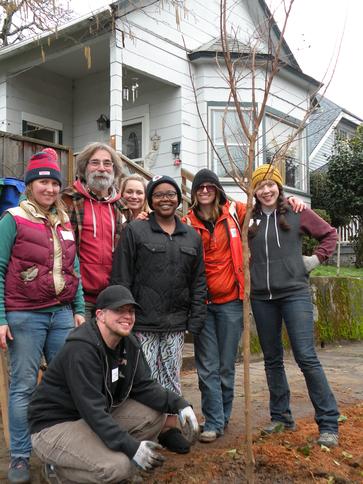 Neighbors and volunteers pictured with a newly planted Muskogee crape myrtle, donated by Friends of Trees.