The native Oregon white oak (Quercus garryana) has a long and important history for the many generations of people that have lived in the Portland area. The range of this tree extends from Vancouver Island in British Columbia, Canada, all the way to Los Angeles, California. Not only does this tree have a wide distribution, but it has and continues to serve various important roles for both people and animals.

Humans have utilized the Oregon white oak for many different purposes through the years. The native tribes, including the Calapooia and Chinook peoples, have used the acorns as an important food source. The process of preparation today usually involves boiling until the tannins have been removed from the fruits. Historically, the native peoples used flowing water to remove these potentially harmful chemicals. A large number of leaching pits have been found on Sauvie Island, where a natural spring constantly pushes fresh water through the soil and into Multnomah Channel. It is estimated that this location may have processed over 2.5 million acorns a year, providing the people with 59 million calories. These acorns were not only consumed by the collectors, but also used as a trade good.

This history of trade is reflected in the genetic distribution of the Oregon white oak through the Pacific Northwest. Genetic differences seem to indicate that most of the oaks that grow in the Willamette Valley originated from the area around Vancouver Island, BC, rather than from Southern Oregon and Northern California. This seems to indicate the movement of acorns from the north, along the Columbia and Willamette Rivers. There are some isolated pockets of the genetically southern white oak in Washington State, indicating movement north, as well. These are great displays of how important a food source this species was to the native peoples.

For more information about Oregon white oaks and their history in the St. Johns neighborhood, join us on Saturday April 9, 2016 . Historian Dave Hedberg will present on the history of trees in this neighborhood and the roles they have played through time. 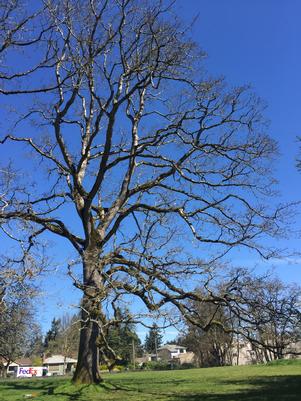