Portland Parks & Recreation (PP&R) and Portland Parks Commissioner Amanda Fritz announce the groundbreaking of Gateway Discovery Park, set for Saturday, May 7, at 11am. The new park and urban plaza will encompass nearly four acres off NE Halsey St between NE 104th and 106th avenues, and is being built in partnership with the Portland Development Commission (PDC). Gateway Discovery Park will serve nearly 800 households which do not currently have ready access to a park or natural area. The community groundbreaking celebration includes a Native American blessing of the land, cake, special guest speakers, and is free and open to all. 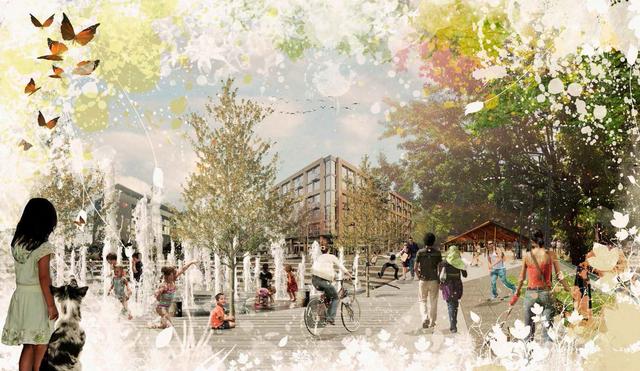 “The groundbreaking of Gateway Discovery Park represents another major milestone in my work with Portland Parks & Recreation to increase East Portland residents’ access to parks,” says Portland Parks Commissioner Amanda Fritz. “Now, the park site begins its transformation from a vacant lot to a welcoming, vibrant neighborhood plaza and gathering space for the Hazelwood and Parkrose Heights neighborhoods. I hope it will be a catalyst for economic development in Gateway.”

Gateway Discovery Park will feature an inclusive play area thanks to Harper’s Playground (see below), natural play elements such as a boulder hill and slide, a water play fountain to splash in, a sand and water play area, a skateboarding area, lights, a large open grass area, a performance space, a plaza, seating, and more.

“It is extremely exciting to see Gateway Discovery Park begin its long-awaited construction,” says Portland Parks & Recreation Director Mike Abbaté. “Gateway Discovery Park will be a vibrant neighborhood park, as well as an urban plaza, with space for recreation, reflection, Summer Free For All activities, and special events year-round.  It will be a vital part of our city, well into the future“.

As the park construction gets under way, programming work is also beginning on the one-acre parcel adjacent to the site, which will be redeveloped into a mixed-use development through a partnership led by PDC and including the Portland Housing Bureau, Gerding-Edlen and Human Solutions.

“Over the next five years, PDC and the city will invest more than $25 million throughout Gateway, adding to the area’s commercial activity and vibrancy,” says PDC Executive Director Patrick Quinton. “Today’s groundbreaking marks this multi-year series of significant investments to promote and reinforce Gateway’s identity as a family-friendly, multi-generational, and multi-cultural neighborhood that serves all its residents.”

Harper’s Playground committed to raising the funds to make the new Gateway Discovery Park the site of Portland’s next inclusive, barrier-free playground: the second in the City of Portland. Their first project is at Arbor Lodge Park in north Portland. The non-profit group participated on the Project Advisory Committee and advised on inclusive design and community engagement. The committee and the community were very receptive and committed to creating a Gateway Discovery Park play area that supported the participation of ALL children. Harper’s Playground continues to advocate for inclusive playgrounds citywide and across the country.

"We are extremely honored to be involved with the Gateway Discovery Park project,” says G Cody QJ Goldberg, Executive Director of Harper’s Playground. “The park will be an incredible asset for the immediate neighborhood as well as the entire city. We look forward to playing alongside new friends of all abilities once this special park is open for business."

Features
The nearly four-acre park will become a “living room” for the Gateway community, featuring accessible spaces and activities for all ages, including a plaza ready to accommodate a variety of events, festivals, and farmers' markets. As envisioned in the Master Plan, the park will also include flexible green spaces to accommodate picnic areas, accessible playground features and nature play.

Equity/Equal Access
The park will serve more than 800 new households which currently do not have ready access to a park. Data show that 36% of these households are racial and ethnic minorities, and 28% are experiencing poverty.

PP&R thanks the valued volunteers and partners who’ve committed time and input into the Gateway Discovery Park project. Special thanks to Harper’s Playground, Portland Development Commission, Gateway Area Business Association, area neighborhood and community associations, and the community at large for their participation and continued support for the new park.

Gateway Discovery Park is one of two new parks beginning construction in east Portland this year (along with the soon-to-be constructed Loowit View Park). Once completed, the two parks will serve nearly 1800 households which do not currently have ready access to a park or natural area. In 2014, Portland Parks Commissioner Amanda Fritz dedicated System Development Charge funds (revenue from new construction development in Portland) towards these projects.

Challenges Remain
As Portland Parks & Recreation commits to new parks in communities where none currently exist - and to expanding other parks - many existing parks are at a crossroads. For decades, PP&R operating funding has been cut or remained flat, forcing the Bureau to postpone rehabilitation and maintenance in every neighborhood throughout the City. Despite the 2014 Parks Replacement Bond, passed by voters with overwhelming support, the list of needs across the PP&R system is huge, and grows every year that we don’t address it. PP&R has anticipated unfunded maintenance needs totaling nearly $250 million over the next 10 years. The beautiful parks we love to visit are being held together by thousands of volunteers and wonderful employees going above and beyond the call of duty.

System Development Charges, the funding being used to create the Gateway Discovery Park (not General Fund tax dollars), are restricted to expanding capacity only. SDCs cannot be used to maintain or repair existing facilities. It is also insufficient to fully address the hundreds of park projects needed by our rapidly growing neighborhoods – an additional need of approximately $472 million over the next ten years.

”In east Portland, two out of every five households do not have easy access to a City park. That is in stark contrast to the rest of Portland where four out of every five households live within a half-mile of a park or natural area“, adds Commissioner Fritz, who designated Loowit View and Gateway Discovery Parks for development after careful consideration of community input. Commissioner Fritz considered four worthy park options that were ready to build in east Portland – those with completed Master Plans.