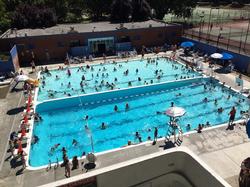 Photo: The recently completed Parks Replacement Bond project at Grant Pool, which reopened July 25, 2016. Some of Grant Pool’s old inner workings dated from the 1920s before the Bond allowed for much-needed upgrades.

The Annual Report shows that design work is underway or complete on 26 of the 33 Parks Replacement Bond projects, one project (Grant Pool) is already complete, and 16 projects are proceeding ahead of schedule.

“It is crucial to have the Parks Replacement Bond managed effectively, as it is addressing some of the most pressing needs across the PP&R system,” said City Commissioner Amanda Fritz. “I am particularly happy to report that 32% of the Bond’s professional services contracts and 21% of construction contracts have gone to minorities, women, and/or emerging small businesses. We will continue to work alongside the community in the implementation of this bond and look forward to further reports on how projects are progressing”.

In November 2014, 74 percent of Portland voters elected to implement the Parks Replacement Bond – the highest percentage ever of votes for a parks-related ballot measure. The Bond calls for up to $68 million in major repair projects, distributed among two project lists (the current list is for the 33 existing projects totaling $48M; the second Bond project list will be developed this autumn).

“I am grateful to Portlanders for not only supporting the Bond but also helping shape the projects,“ says Portland Parks & Recreation Director Mike Abbaté. “The community’s input results in a better product.”

Highlights of the Annual Report

“The Bond’s $68 million in funding will help address some of the most crucial needs of the Parks system,” added Commissioner Fritz. “But unfortunately, it is not enough to close the gap on all of our major maintenance needs. We will continue to look for ways to leverage bond funds with outside grants and private fundraising efforts. And I will continue to look for ways to address the needs of our parks system.”

More help is needed to close the play gap

Portland Parks & Recreation remains grateful to Portland voters for the $68 million Parks Replacement Bond, which takes aim at a $248M funding gap for major maintenance needs over the next ten years. Further, PP&R anticipates $472M in unfunded growth needs during that period. That adds up to a $720M funding gap over the next decade, which Commissioner Fritz will continue to work with City Council to address. Currently, 20% of people living in Portland do NOT have access to a park or natural area within a 15 minute walk, and the bureau is working hard to close this “play gap”.