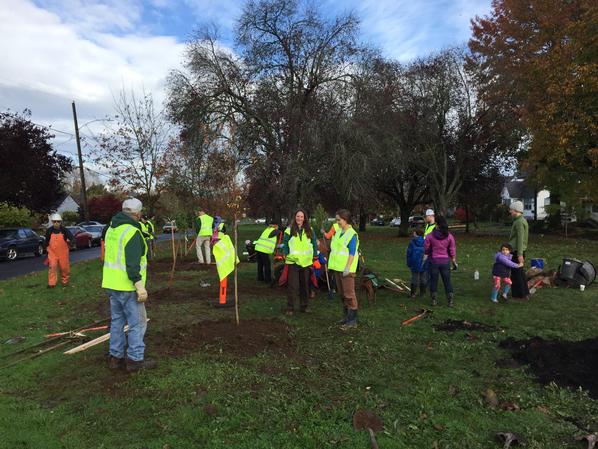 Agenda
9:30 am - 10 am: Register, sign in, have a cup of coffee
10 am - 11:30 am: Walk & Talk with Urban Forestry Staff Jim Gersbach and Neighborhood Tree Steward Catherine Clark

Throughout the walk, they will be highlighting the benefits and beauty of conifers and broadleaf evergreens, along with other new deciduous trees in the blocks. Jim and Catherine will share the history of the blocks, with a focus on new plantings. Our urban tree canopy provides important ecosystem services, such as:

Despite the advantages of evergreens, a recently completed street tree inventory carried out by Urban Forestry and 1,300 volunteers shows that in developed parts of the city, 90% to 98% or more of the street trees are deciduous, and the majority of these are small or medium size. Many of the new trees planted on the park blocks will attain very large size, thus contributing more benefits than smaller trees. Other trees recently planted on the Roseway park blocks are flowering trees with late spring or summer bloom times. This later blooming period extends the availability of nectar for pollinators. Other trees were planted to provide seeds and nuts relished by birds, squirrels, and other animals that share our urban environment.

Read on for some brief tree descriptions of the trees we will be discussing during our walk.

Still reading? Join us as we explore the exciting new large-canopy, pollinator-friendly and evergreen trees in Roseway. Register here!
For more information, or if you have something you want to talk about, contact: