PLEASE NOTE THAT 2018 WASHINGTON PARK SHUTTLE HOURS ARE 9:30AM-7PM. THE SHUTTLE IS RUNNING ON WEEKENDS THROUGH APRIL; AND BEGINS DAILY SERVICE THROUGH THE SUMMER FROM MAY 1-SEPTEMBER 30.

The shuttle carried a record 128,000 people in 2016 on its 30-minute loop through Washington Park, leading to a decrease of over 12,800 car trips. 2017 will see a number of improvements to the shuttle service, including lower wait times and expanded daily service for the months of May and September (part of peak visitor season in the park). 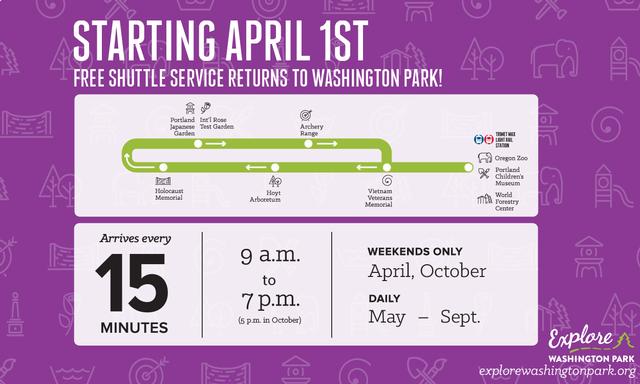 The shuttle connects visitors to all the world-class attractions in Washington Park, as well as to TriMet’s MAX Red and Blue lines, shuttles arrive every 15 minutes at each of the stops with an additional bus being added to help ensure consistent service and to expand passenger capacity. All shuttles are ADA accessible. Riding the shuttle is even more appealing this year due to the ongoing reservoir project in the park, which impacts parking and access for private cars.

“The free shuttle is a fun and easy way to visit the Japanese Garden and the rest of Washington Park,” says Portland Japanese Gardens Deputy Director Cynthia Haruyama. “Let someone else do the driving and worry about parking!  We’re thrilled that the shuttle service is starting a month earlier this year just in time for visitors coming to see our Cultural Crossing expansion and for the Rose Garden’s 100th anniversary this summer.” 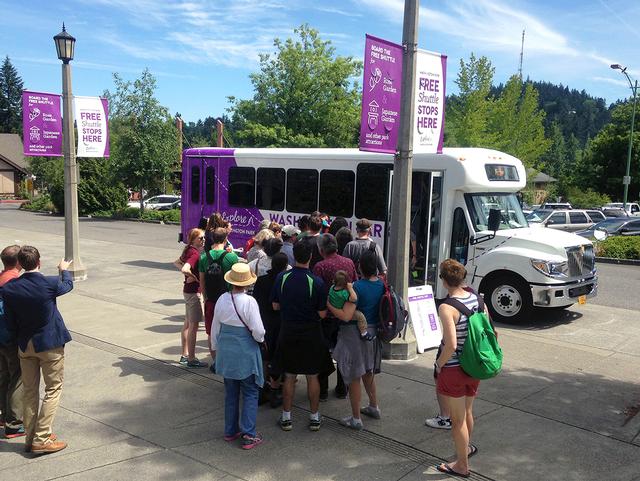 Photo: The free Washington Park shuttle runs throughout the popular park April-September, and helps the nearly 3 million visitors to iconic Washington Park get around smoothly and easily.

Record attendance is expected this summer season with the opening of the Oregon Zoo’s Education Center and Portland Japanese Garden’s Cultural Crossing. Visitors are encouraged to take MAX or rideshare service to Washington Park, as construction on Portland Water Bureau’s Washington Park Reservoir Improvement Project will continue throughout 2017, resulting in the loss of parking capacity and street closures that will make parking near the Portland Japanese Gardens limited.