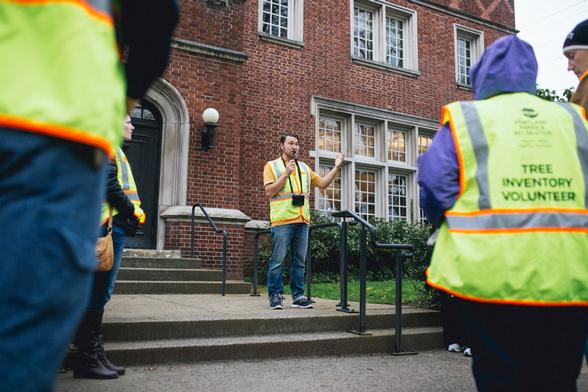 William Kerns, East Mount Tabor’s emigrant homesteader had serious skills with the broad axe. In the 1850s, Kerns cleared his 320-acre Donation Land Claim making mainly wood shingles and shakes for sale. According to a descendant, Kerns could “hew a sill or a beam with the greatest precision and with amazing speed.” In 1855, the East Portland-Mount Tabor School District elected Kerns as their school director. He led the movement to buy land for Washington High School, and later, the board named the school at NE 25th and Everett after Kerns 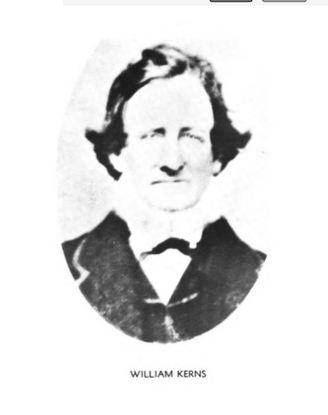 Image from: Genealogical Narrative: a history of three pioneer families, the Kerns, Popes, and Gibsons by Edith Kerns Chambers

The Kerns Neighborhood gets its name from the school, and by association, with William Kerns. It’s easy to imagine Kerns, axe in hand, hungry for timber, as he made east Portland’s own Stumptown. We should be careful, though, to judge. After all, his was a practice common for the time, and he was not alone in thinking this was improving the land. What is more fascinating is the story of the neighborhood after. 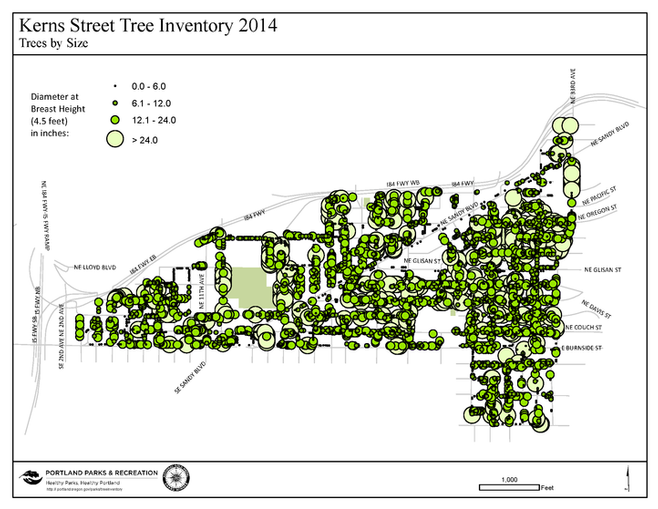 Map of Trees by size in Kerns. You can clearly see where the canopy is lacking on Sandy Boulevard.

Following William Kerns’ days with his axe, people replanted as they made the Kerns Neighborhood their home. According to the 2014 Kerns Neighborhood Street Tree Inventory, the neighborhood has 3,140 trees representing 91 different types. There’s actually a good number of large trees throughout the neighborhood (25%). However, it’s easy to see on the map where canopy is lacking. Look no further than Sandy Boulevard. This bustling commercial district bisects the neighborhood diagonally in a northeast-southwest direction. The history of this road is the key to understanding why it lacks mature trees.

The Sandy Road, as it once was called, is one of the city’s oldest roads. This 1851 Government Land Office map shows the road running nearly the same path as it does today. For emigrants who floated the Columbia River George, Sandy was the final road into Portland and the Willamette Valley. By the turn of the century, Sandy Road was a commercial district and arterial into downtown for farmers and the increasing numbers of suburban home and apartment dwellers in the city. 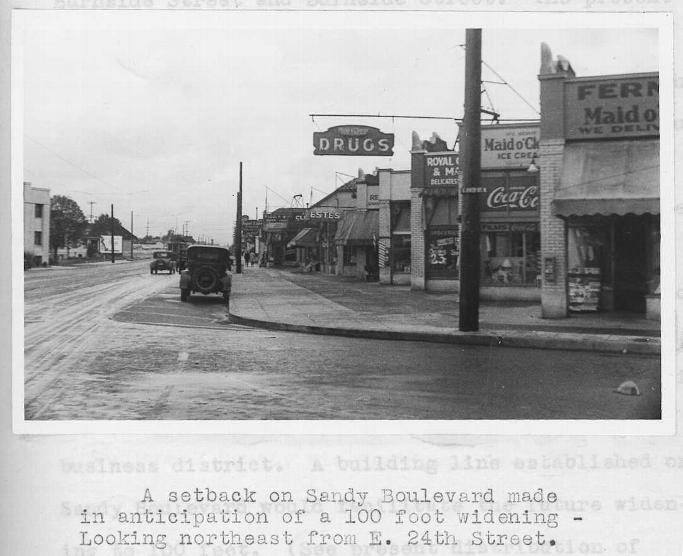 In the 1920s, residents along Sandy Road debated changing the name to Roseway Boulevard. Interested in beautifying the road after the Rose Festival, advocates modeled the idea after the great European boulevards. Envisioning “roses, trees, and shrubs… it will be a real boulevard and surely be entitled to that dignified name,” declared the Portland Men’s Community Club.  Instead, the name changed to Sandy Boulevard to honor the local significance of the road to pioneers like Mr. Kerns. Still, advocates hoped for the large trees to line Sandy Boulevard, which had ample setbacks. 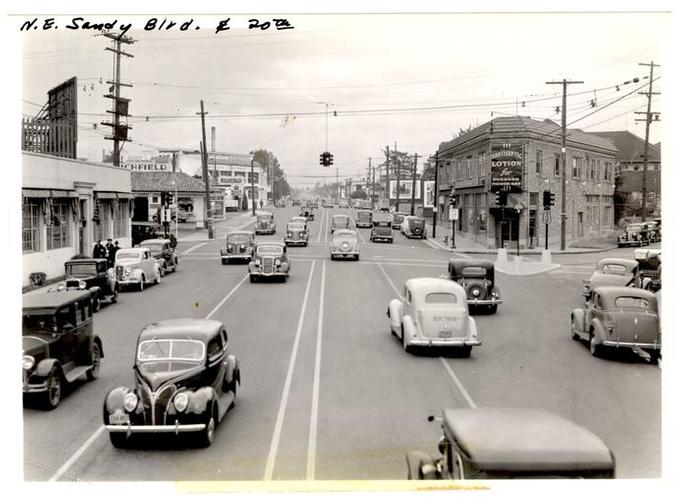 By the 1930s Sandy road was widened for increasing auto traffic, occupying the space for large trees envisioned a decade earlier. This shot of Sandy Boulevard from 1940, if it weren’t for the cars, looks similar to today. With a history as a county road, a city boulevard, and a state highway, the growth of Sandy Boulevard has hardly left any room for street trees. Still today, there are possibilities to bring more trees to Sandy today and care for the many trees planted after pioneers like William Kerns cleared the land. 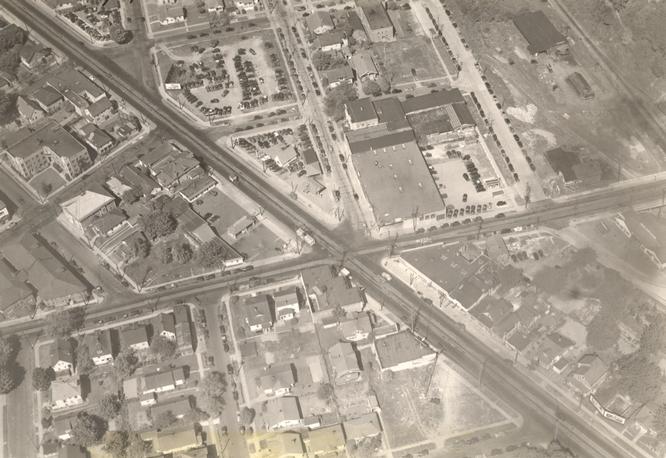 If you want to learn more about how human history and the urban forest are inextricably connected, please come for a free presentation at the Zipper, Tuesday night April 11, 2017 from 6:30 – 8:30. We’ll not only learn about the past, but we will discuss simple ways to be stewards of our urban forest. Register Here!

For more information, or if you have something you want to talk about, contact:
Mason Wordell
Tree Plan Coordinator & AmeriCorps Member
Mason.Wordell@PortlandOregon.gov
503-201-3133