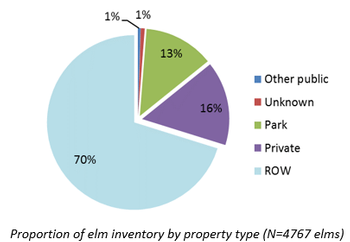 PP&R Urban Forestry has a new tool in their elm management arsenal, data. This summer, with the help of 1400 tree inventory volunteers (and about 17,000 volunteer hours), Urban Forestry (UF) completed an inventory of Portland’s street trees, which included elms. UF staff inventoried private elms as well, resulting in the first complete assessment of Portland’s elm population to date. This inventory data is critical in managing elms, which are in a constant battle with Dutch elm disease and meeting the challenges of living in an urban environment.

Dutch elm disease (DED) is caused by a fungus (Ophiostoma spp.), which spreads via adjacent elm roots and may also be transmitted by bark beetles. DED may spread by roots, in a process called root grafting. Root grafting may occur when DED positive elms are in close proximity to other elms and there is contact between roots below ground. DED spores are also spread via an insect vector, elm bark beetles. Understanding where elms are located across the city and where elm mortality occurs is a first step to understanding how DED spreads through Portland’s elm population.

Fortunately, there is a treatment used to prevent the growth of the DED fungus. The treatment consists of a special fungicide that is injected at the base of elms, into their water-conducting system, or xylem. Healthy elms that are good candidates for treatment are treated every three years. The tree itself also helps propel the protective fungicide up the tree, throughout the canopy. In 2016, UF treated 129 park elms with the Arbotect fungicide. Neighborhood groups, such as Save Our Elms, also joined the effort and treated 115 elms with either Arbotect or Alamo.

Analysis of elm loss reveals interesting spatial patterns. In some areas with high elm density, such as Ladd’s Addition, adjacent elms are lost in each subsequent year as DED progresses down a block, likely via root grafting (see Figure 2). 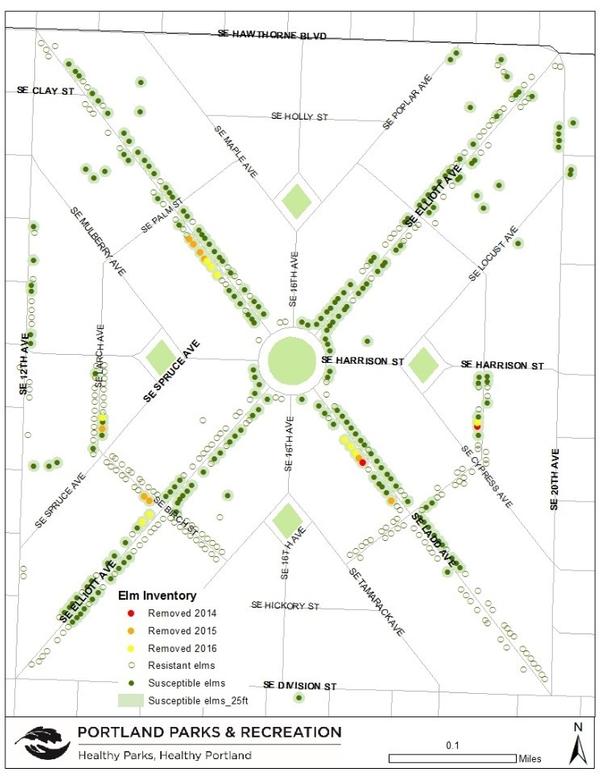 Figure 2. Map of elm trees in Ladd’s Addition. The light green buffer around elms shows the 25-foot distance within which DED can be transmitted via root grafting. DED can spread up to a distance of 50-feet.

However, in other areas of high density, the pattern of annual loss may not occur via root grafting, or may occur in combination with transmission via elm bark beetles. For example, in Eastmoreland there isn’t a clear spatial progression of elm loss along blocks (Figure 3). However, there are other potential factors that could explain the differences between elm loss in the two neighborhoods. For example, the neighborhoods differ in their use of fungicide used to prevent growth of DED. 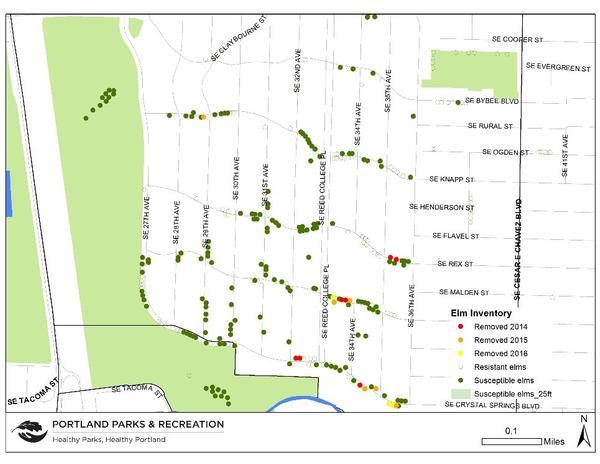 Currently, Urban Forestry removes DED-infected elms in the public ROW, which requires a full crew of arborists and lasts an average of three days per tree, not including stump removal. This service, however, is not offered to residents for the removal of other tree species located in the ROW. In the interest of equity, Urban Forestry recommends that removal of DED-infected elms becomes the responsibility of the adjacent homeowner. This change in policy would then comply with the Title 11 Tree code, which requires adjacent homeowners to maintain and remove street trees. In addition, this change would lead to more equitably distributed city services as Urban Forestry would then dedicate more time to maintenance and care of park trees across the city, as well as continuing to monitor elms for DED.

Given potential changes in the removal policy of DED-infected elms, Urban Forestry could reallocate time and effort to DED prevention. For example, patterns of DED-related elm loss seem to indicate that the mode of DED transmission may vary across Portland. Formally investigating the spread of DED through Portland’s elms could help inform future management decisions.

Portland also manages for DED through the planting of DED-resistant cultivars. The size distribution of such elms is heavily skewed toward smaller elms (Figure 4). Proper tree pruning will be critical to ensuring a healthy future for these young elms. As neighborhood groups continue their care of elms, they may want to incorporate young-tree pruning in their elm management, of course with the proper tree pruning permits.

Currently a moratorium on elm pruning is implemented from April 15th through October 15th, to avoid pruning when elm bark beetles are most active, as elms with injuries, such as those made by pruning, are especially attractive to elm bark beetles. To further prevent DED, Urban Forestry is considering adjusting the moratorium window each year, dependent on springtime temperatures, which predict onset of beetle activity.

How to Identify and Manage Dutch Elm Disease