Trees are an integral part of any neighborhood’s history. The Irvington Neighborhood’s large tree-lined streets and mature yard trees are key features of this Portland Historic District. However, there are several important lessons from Irvington’s history that threaten its defining arboreal assets. 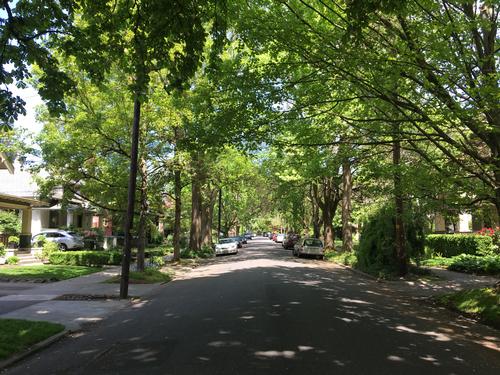 On a hot sunny day, it’s easy to stay cool as you stroll through Irvington’s tree-lined streets. Remember these trees are artifacts that were integral to the neighborhood’s design.

The Irvington Neighborhood gets its name from William and Elizabeth Irving, who obtained a donation land claim here in 1851. Later, developers David P. Thompson, Ellis G. Hughes, John W. Brazee, and eventually Charles Prescott, who are memorialized in the neighborhood’s street names, platted Irvington tract in 1887. The use of restrictive covenants, also called deed restrictions, set the conditions for homebuilding as well as who could live here. Although hard to believe today, early Irvington prohibited the manufacture and consumption of liquor and even forbade Chinese from owning property. 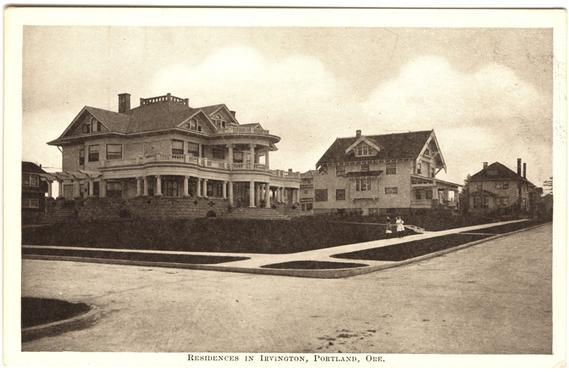 Like many neighborhoods, the homes in Irvington went in before the trees. Trees graced these large planting strips not soon after this photo was taken in 1905. City of Portland Archives, A2004-002.629.

By the 1890s, lots with restrictive deeds, large setbacks, and wide 6 – 12 foot planting strips attracted Portland’s upper-class to build their homes here.  Advertisements of the era promoted planting large trees along the streets and in yards. In fact, Irvington’s current mature canopy of maples, elms, horsechestnuts, catalpas, and birches are all artifacts from this early period, as seen in advertisements like this one from the 1913 Oregonian. 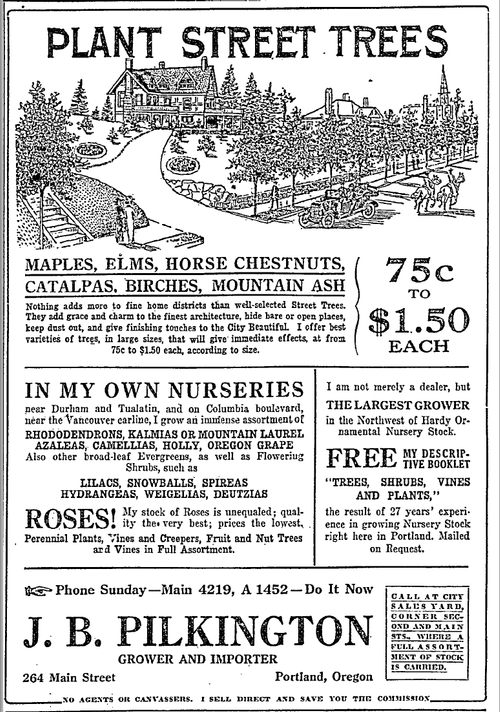 J.B. Pilkington’s 1913 Oregonian nursery advertisement demonstrates the aesthetic reasons people planted street trees. His tree offerings, for the most part, also match up with the mature canopy we see in Irvington today.

In turn of the century Irvington, planting street trees and landscaping your yard was both a sign of affluence and part of a much larger tradition of urban beautification called the City Beautiful Movement. Defined broadly, the movement emphasized urban parks and connected parkways to inspire and promote social progress. Yet, Irvington’s early restrictive zoning limited the overall goal of improving social health for all of Portland. 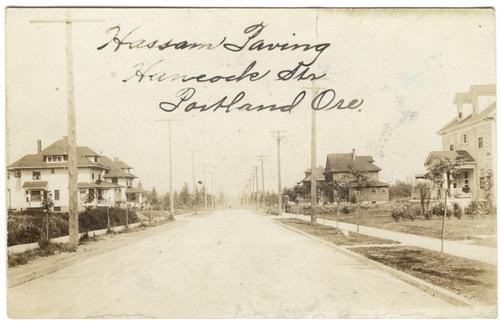 Irvington’s NE Hancock Street after paving and street tree plantings in 1912. Many of the big leaf maples, Acer macrophyllum, in the neighborhood likely date to this period. City of Portland Archives, A2004-002.2517.

Encouraging other neighborhoods to plant trees, Florence Holmes, Landscape Architect for the Portland Parks Bureau published a detailed article on how to integrate your street tree to your home landscaping. Published in The Oregonian in 1921, the article outlined aesthetic benefits of trees and that plantings “express the personality of individuals who live in the home.” In selecting a tree, she stressed consideration of the local topography, “Irvington folk are able to accomplish much in the use of velvety lawns and a general open treatment,” she wrote.  Further, she stressed uniformity and cooperation between neighbors to achieve single species monocultures. The results of her recommendations led to the mature and homogenous plantings of horsechestnuts, maples, ash, and elm often seen in Irvington today. These recommendations from the past pose significant issues for the future of Irvington’s canopy. 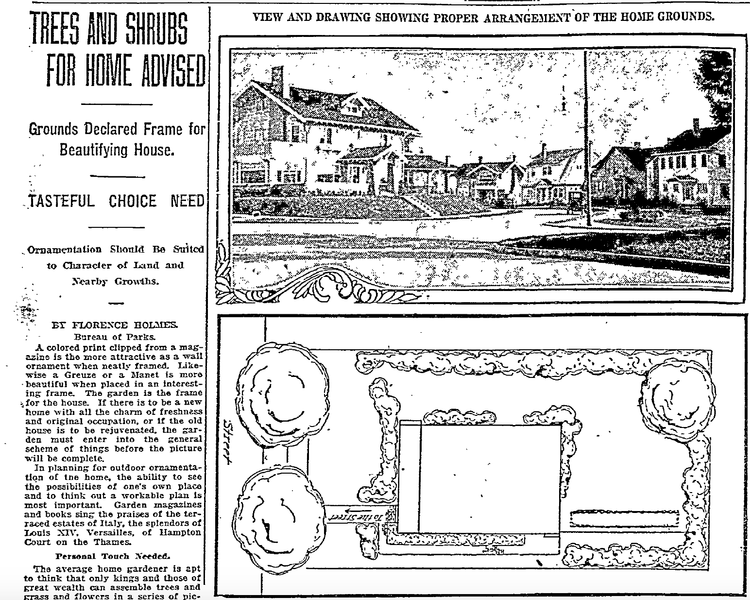 In her 1921 Oregonian article, Florence Holmes promoted planting neighborhood monocultures, an idea we now understand puts the urban canopy at risk for infestation by pests and diseases.

According to the 2015 Irvington Street Tree Inventory, 54% of all Irvington’s street trees are in the Sapindaceae and Rosaceae families, many of which date to the neighborhood’s early plantings. This forest composition means that over 50% of all trees in Irvington are susceptible to emerald ash borer, Asian longhorned beetle, Dutch elm disease, or bronze birch borer—threats which Florence Holmes did not foresee in 1921. If she had, she likely would not have recommended planting only these trees. Moving forward, the Irvington Tree Team is learning from the mistakes inherited from our past and helping promote more diverse tree plantings to ensure a resilient, sustainable urban forest. 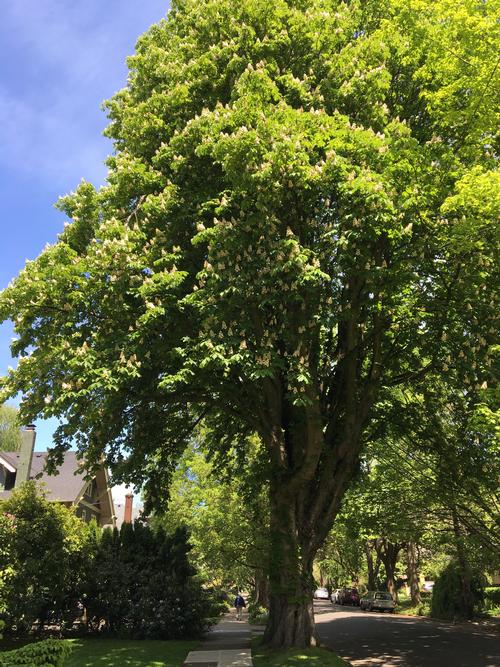 This horsechestnut, Aesculus hippocastanum 'Baumannii', is also Heritage Tree #261. It’s surrounded by others of its species on NE Thompson and NE 16th, likely all planted at the same time.

If you would like to learn more about the history of trees and the people who planted them in Irvington, please come for a free walk and talk exploring Irvington’s heritage trees on Saturday, May 20th (see registration link above). We will view some of the largest and oldest trees in the neighborhood, as well as some new varieties planted in our lifetimes. We’ll not only learn about the past, but we will discuss simple ways to be stewards of our urban forest.