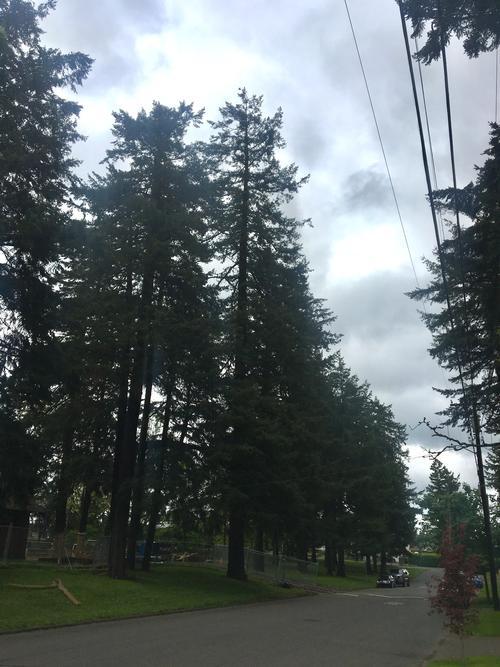 The tallest tree you can easily see in Lents is a 153-foot-tall Douglas fir, Pseudotsuga menziesii, and is located along SE Steele St. in Lents Park.

Where is the tallest tree in the Lents Neighborhood? Portland State University’s Canopy Analytics quickly answers that question with their useful mapping program. The tallest tree in south Lents is a 179-foot tall Douglas fir, Pseudotsuga menziesii, located in a steep and inaccessible ravine outside Willamette National Cemetery. However, the tallest tree in Lents that you can view without an expedition is a 153-foot-tall Douglas fir in the south end of Lents Park. In addition to being accessible, this tree exemplifies the historic stewardship of neighborhood residents who established this park. 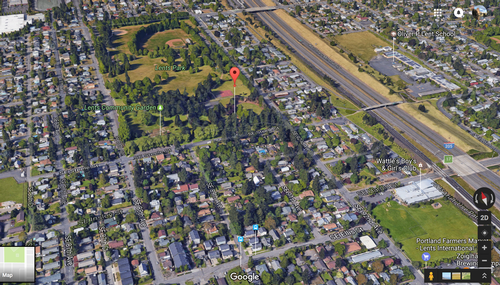 Before it was a park, this site was once a deep gravel pit. While most of the Lents neighborhood sits on a 190-acre farmstead purchased by Oliver P. Lent in 1866, the park has a different story. From its earliest days, Multnomah County officials had set aside the southeast corner of the parcel for a gravel pit to maintain the Oregon City and Foster Roads. Additionally, officials designated the land east of the park for schools, which was the site of the first Lents School and after 1949, the location of Oliver P. Lent Elementary. 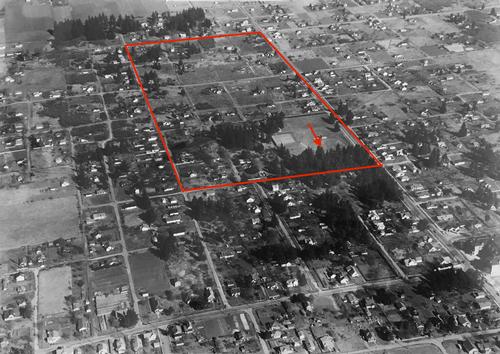 A 1940 aerial view of Lents Park before its second phase expansion. The park’s current boundary is in red. The first phase of the park was in the Southeast corner. The red arrow indicates the tallest tree today. Note the extent of the fir groves throughout the area and compare to the Google Map image. City of Portland Archives, A2001-045.931.

In 1902, Henry A. Darnell purchased a large, densely forested lot south of the gravel pit and became the local school principal. On his walks to work through the stands of Douglas fir, Darnell would see children playing in the grove and gravel pit. With the advent of a new road technology called macadam, the county no longer used the pit and so Darnell had an idea: he and a team of volunteers persuaded the county to convert it into a park and playground. 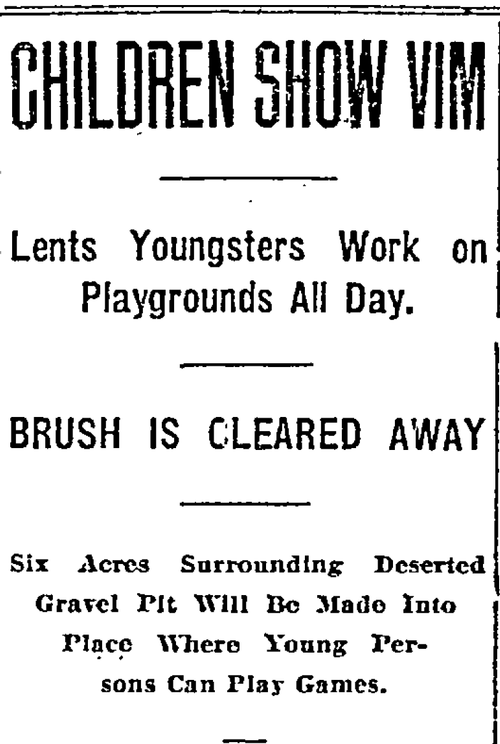 In March of 1912, two hundred children in Lents armed with tools, cleared the gravel pit of brush and began developing paths. “Working on a plan laid out by residents of Lents and vicinity, the children did a great deal toward shaping the playground out with an attractive park on the one end and a good sized baseball diamond on the other,” The Oregonian reported. At noon, “there was a wild scampering for the trees,” where the children ate lunch and sang songs. After November of 1912, the City of Portland annexed Lents, and the parcel became a city park. Improvements to the park were simple. By 1915, workers filled in the pit, constructed a playground, trails, comfort stations, and athletic fields. In the 1940s Portland vastly expanded Lents Park to its present size. 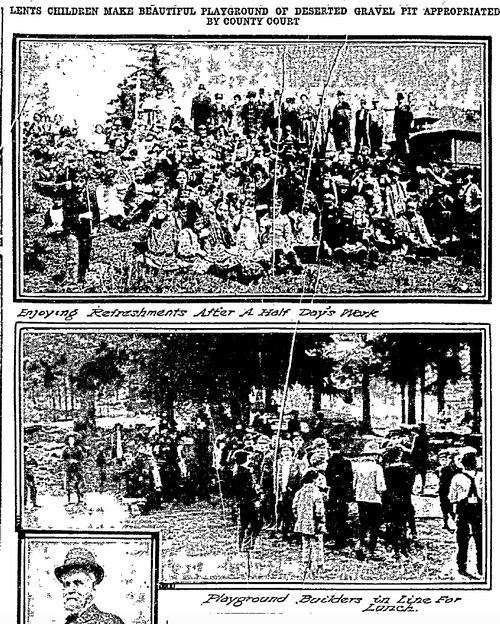 The Oregonian, March 31, 1912, shows the children working amongst the Douglas firs.

The tall tree was just a young one during these first park improvements. Neighborhood descriptions note the many dense stands of fir, but their exact ages remain unclear—likely because the groves are multi-generational stands planted, thinned, and replanted over the years. Aerial photographs of Lents from the 1940s show the prevalence of these pockets of Douglas fir groves. As the neighborhood has grown the stands have shrunken. Still, Lents Park and the parcels to the south still boast some tall Douglas firs that likely predate the park’s 1912 establishment. Many of the trees show the signs of surviving intense wind storms, and over the years, some have fallen to both weather and human activity. Nonetheless, these fir groves, including the tallest tree you can see in Lents, continues to symbolize the neighborhood’s desire to establish its first public park. The trees towering presence reminds us that maintaining these groves requires staggered planting and some long-term thinking to keep a forested city.

If you would like to learn more about the history of trees and the people who planted them in Lents, please attend a informative talk at the Zenger Farm on Tuesday, May 23, 2017  (see registration link above).  Using historic photographs, we will explore some of the largest and oldest trees in the neighborhood, as well as some new varieties planted in our lifetimes. We’ll not only learn about the past, but we will discuss simple ways to be stewards of our future urban forest.