Portland Parks & Recreation (PP&R) was recently awarded the National Recreation and Park Association’s (NRPA) 2017 Park Champion of the Year Award. The award, which recognizes an employee of a park and recreation agency’s exemplary efforts to educate their members of Congress or their staff on the importance of investing in local parks and recreation, was presented this past Wednesday night to PP&R’s Som Subedi at the 2017 NRPA Annual Conference in New Orleans. 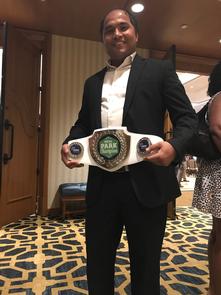 Subedi, a former refugee and the coordinator of PP&R’s Parks for New Portlanders program, hosted Grace Stratton of Senator Ron Wyden’s office at the Bureau’s WALK with Refugees and Immigrants event on August 20, 2017, which featured around 1000 participants. A congratulatory letter from Senator Wyden (attached) was read at the award ceremony.

“Portland Parks & Recreation embraces all Portlanders, whether we’ve been here for a week or were born and raised here,” says Portland Parks Commissioner Amanda Fritz. “I am grateful to the NRPA for recognizing Som for his efforts. As a former refugee working to assist newcomers in an unfamiliar country, he is truly a champion who leads by example. I applaud him for his dedication to equity and inclusion, which are key values in Portland Parks & Recreation’s mission now and going forward.”

“The 2017 Park champion award is a great achievement for the Bureau and for Som,” says Portland Parks & Recreation Director Mike Abbaté. “It is a terrific endorsement of the City of Portland’s efforts to make sure there are Parks for New Portlanders, and that we continue to increase our engagement with people new to the Rose City – and to the USA.”

In spring 2018, Subedi will travel to Washington, D.C., to advocate for parks and recreation on Capitol Hill. Portland Parks & Recreation will also be featured in NRPA’s award-winning publication, Parks & Recreation magazine and Open Space blog. Originally from Bhutan, Subedi was forced to flee his native country and spent years in a refugee camp in Nepal. He came to Portland nine years ago. Som helps create and organize numerous Parks for New Portlanders events, including the annual Portland World Cup Soccer Tournament.

“This award belongs to all Portlanders, certainly not just me, because we earned it together,” says Subedi. “I want to thank Parks Commissioner Fritz and Director Abbaté for trusting in, and for mentoring, a refugee who is committed to equity and inclusion. I am very proud of the compassion, generosity, and welcoming hearts of Portlanders in general, and of Portland Parks & Recreation in particular. I’m only inspired to do more work on behalf of all of us who call the Rose City home.”

Park Champions across the country are hosting events highlighting their parks and recreation department and programs to their U.S. representative or senators and/or their staff. To learn more about NRPA’s Park Champions initiative, click here.

“In this era of economic challenges, it is rare that park and recreation budgets rise to the top of anyone’s budget priorities,” adds PP&R Director Abbaté. “The Park Champion initiative allows Portland Parks & Recreation officials to engage decision makers in a way that shines a spotlight in communities and gets attention in ways standard lobbying may not.”

Portland Parks & Recreation, via the Parks for New Portlanders program, also hosts events such as the Portland World Cup Soccer Tournament and New Portlanders Cultural Celebration and Family Day. These events are often many newcomers’ first experiences with their City government, and helps people new to Portland access Portland Parks & Recreation offerings and other City services.

About the National Recreation and Park Association
The National Recreation and Park Association is a national not-for-profit organization dedicated to ensuring that all Americans have access to parks and recreation for health, conservation and social equity. Through its network of 60,000 recreation and park professionals and advocates, NRPA encourages the promotion of healthy and active lifestyles, conservation initiatives and equitable access to parks and public space. For more information, visit nrpa.org. For digital access to NRPA’s flagship publication, Parks & Recreation, visitparksandrecreation.org.