One of Oregon’s most beloved native trees, and our state tree since 1939, Douglas-fir is seen in parks and yards across the city of Portland. These trees can grow to be 300 feet tall with a 10 foot diameter, and are long-lived. In fact, Portland's tallest tree is Heritage Tree #134, a 242-foot Douglas-fir growing alongside Balch Creek in Forest Park. In the urban environment, Douglas-fir provide important habitat for animals such as residential and migrating birds, along with countless insects and mammals. Douglas-firs are commonly identified by their cones, which feature 3-pointed bracts between the scales that some people think resemble the back legs and tail of a mouse. Most people are familiar with the shaggy appearance of the Douglas-fir caused by their unique branching form; coupled with height, a Douglas-fir embodies the iconic beauty of the Pacific Northwest. 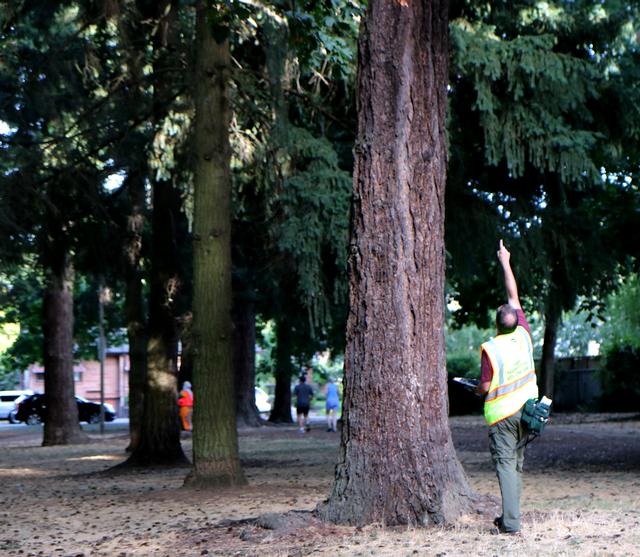 For true tree nerds, Douglas-fir's various names over the years provide a lesson in just how complicated taxonomy can be! Douglas-fir is not a true fir (Abies genus), which is why a hyphen is always included in the common name. Instead it belongs to the genus Pseudotsuga, which means “false hemlock” (tsuga being the name for hemlock in Japanese). While its common name honors the Scottish botanist David Douglas, who explored the Pacific Northwest in the 1820's (see a recent blog post on him here), its botanic name (Pseudotsuga menziesii) gives that honor to Archibald Menzies, another Scottish botanist who traveled here two decades prior, and who first described the tree to Europeans back home. This means the "Latin name" for our state tree actually includes 3 languages! Maybe we should just call them Oregon pines like they used to!

For more on how our state tree got its name, see this great post by our friends at the OSU Department of Horticulture, and raise a glass to it on our state's birthday this February 14th.