Portland Parks & Recreation, Harper’s Playground, Portland Public Schools Metropolitan Learning Center (MLC), and the MLC PTSA’s Friends of Couch Playground welcome you to a celebration ahead of construction on the Couch Park playground project, Portland’s newest inclusive play area. The event will celebrate the impending start of this Parks Replacement Bond project construction, the partnerships which made it possible, and to share memories of the old play area, which served Portland kids for more than 40 years. 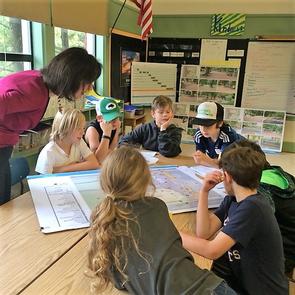 The event will include brief remarks by PP&R Interim Director Kia Selley, and MLC faculty and students will reflect on the memories of the old play area as they celebrate the new one, and Harper’s Playground Executive Director G Cody QJ Goldberg will be the event host. All are welcome at the event, which also features cupcakes and an activity for students. PP&R will also present a rendering of the new play area.

“The construction of another inclusive play area is exciting, and a major step towards increasing equitable play opportunities across the City,” says Portland Commissioner Amanda Fritz. “I am thankful to all the partners, Portland Parks & Recreation staff, and neighbors for the effort, passion, and advocacy that has resulted in a play area that generations of Portlanders of all abilities will enjoy.”

The MLC PTSA’s Friends of Couch Playground, in partnership with Harper’s Playground, raised $500,000 on top of funding designated from the Parks Replacement Bond. Both organizations worked with Portland Parks & Recreation to enlist community support for the concept and engaged in the design process. These efforts ensured that the play area would be designed and constructed as an inclusive site, so that more children can play together.

“Portland Parks & Recreation extends the sincerest thanks to all neighbors and partners, on behalf of all Portlanders and the entire city,” says PP&R Interim Director Kia Selley. “We appreciate the efforts involved to create what will be the fourth inclusive play area in the PP&R system. Increasing equity is vital as we build the parks system for the next generation.”

The improvements at Couch Park include the new inclusive playground, Americans with Disabilities Act (ADA) accessibility improvements in the plaza, and the addition of a Portland Loo to replace the aging, existing restroom (which will be repurposed for staff, maintenance, and storage use).

“Harper’s Playground is thrilled with the partnership we’ve experienced from the MLC PTSA’s Friends of Couch Playground,” says Harper’s Playground Executive Director G Cody QJ Goldberg, who will serve as the event’s emcee. “And we are grateful for the commitment that Portland Parks & Recreation has shown for expanding access to play for all. We are enjoying overwhelming community support for our partnership, and it is wonderful and very gratifying to see the project enter its construction phase. Generations of kids of all abilities will enjoy the new, inclusive play area at Couch Park.”

“The MLC PTSA’s Friends of Couch Playground is glad to be a part of the work of rebuilding the Couch Park Play area,” says Lauren Nathe of the Friends group. “Partnering with Harper’s Playground and with Portland Parks & Recreation has given us the opportunity to support a play space which is welcoming for everybody, incorporates the MLC Character Traits, and gives all park visitors a space where all of us can play together.”

Nathe’s son Max, a Jefferson High School sophomore, was one of two students from MLC School to serve on the Couch Park Advisory Committee. MLC students in fourth and sixth grades spent the spring of 2015 studying the Couch Park design process, including during multiple elective classes led by teacher Susan Beaird and joined by Tanya March, Harper’s Playground’s Cody Goldberg, and Lauren Nathe.

“I played on the old Couch Park playground for most of my life,” says Max. “And I appreciate being able to represent Portland youth and MLC students by participating and giving input on the design; for the benefit of current and future kids who will grow up playing on the new playground.”

The Couch Park playground and other improvements are expected to be complete for an opening celebration in the spring of 2019.

The project is funded primarily by the 2014 Parks Replacement Bond, with secondary funding via a $150,000 Metro Nature in Neighborhoods grant, and $350,000 in funds raised through the Harper’s Playground Foundation. The total project budget (not-to-exceed allocation, for all three elements – playground, plaza, and new Portland Loo) is $2,210,903; not including the $500k commitment from partners.

About inclusive playgrounds in Portland

Inclusive play areas are designed to accommodate the needs of children of all abilities, and to suit the needs of caregivers with varying capacities. Portland Parks & Recreation’s designs for inclusive play areas are based on current, Universal Design best practices, to ensure that all visitors enjoy a sensory-rich environment - one which allows children of all abilities to play alongside each other and opportunities to develop physical, cognitive, sensory and social skills. Inclusive play areas challenge and engage users at their own unique age and developmental levels. In Portland, 4,982 people under the age of 18 self-report having a disability according to the U.S. Census estimate; 0.9% of children under the age of 4, and 5.3% of persons between ages 5 and 15 report having a disability according to Oregon’s 2016 Disability Status Report.

Historically, through partnerships and the funds they have provided, PP&R has created playground design that goes beyond the minimum of ADA Standards for Accessible Design: