It’s easy to look at the numerous large pines with needles reaching 10 inches in length across the city and call them all ponderosa pine. It is, after all, the most widely distributed pine in North America and native to the Willamette Valley. But look closely and you’ll start to see differences in the needles, bark, and cones. Ponderosa pine (Pinus ponderosa) looks very similar to Jeffrey pine (Pinus jeffreyi), with just slight differences between their cones. Two similar looking trees, Coulter pine (Pinus coulteri) and gray pine (Pinus sabiniana), are both rare in Portland, hiding in plain sight until their impressively large cones fall. So how do we determine the difference between these closely related trees? We look at every clue possible, consult with the experts, and sometimes we still have to say “we don’t know”. This is the nature of tree identification – a constant puzzle that can sometimes leave one more confused than enlightened.

In Portland’s urban forest, ponderosa pines are by far the most common of the 3-needled pines. Their needles are 6-10 inches long and crowd the end of branches. In early spring, the male pollen cones are maroon. Closed pine cones are prickly to the touch due to the armor on the seed scales. Cones mature over 2 growing seasons and open in the fall of the second summer. When open, cones are still prickly to the touch, as the prickle on the seed scales points out. The size of cones varies, but they range between 3-6 inches long. In older trees, bark is a yellow-cinnamon color and plated, with dark furrows. In younger trees, bark is gray-red , with smaller plates. Sniff it on a hot day and see if you can smell freshly baked cookies -some say the scent of the bark smells sweet, like butterscotch or vanilla.

The bark of the Ponderosa (left) can be distinctive but this trait varies and is usually only found on older trees. Notice the prickly seed scales on closed and open Ponderosa cones (right).

Jeffrey pine is very closely related to ponderosa pine and the two hybridize readily where their ranges overlap in southern Oregon. The needles of the Jeffrey pine are 6-11 inches long, and cones are 4-8 inches long. The differences between ponderosa and Jeffrey pine are small and hard to see; even with close observation, making a clear distinction between the species is a challenge. Jeffrey pine has yellow pollen cones, and when cones are open, the prickle on the seed scale curves inward towards the cone. Open cones aren’t prickly to hold the way that ponderosa pine cones are, thus the mnemonic “Gentle Jeffrey” and “Prickly ponderosa”. Just to confuse us, Jeffrey pine bark can also carry a sweet smell similar to that of ponderosa pine. Jeffrey pine is fairly uncommon in Portland, but perhaps there are more hiding in our parks than we think. Earlier this summer, volunteers with the Tree Inventory Project measured 3 Jeffrey pines in Gabriel Park. 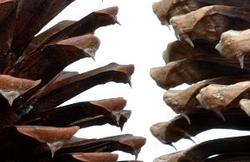 Gray pine (Pinus sabiniana) and coulter pine (Pinus coulteri) are two less common 3-needled pines in Portland, and they too can be difficult to distinguish from each other. Both have needles that are 6-10 inches long and both bear impressively large cones.

Gray pine cones are large, with big seed scales that are tipped with long, sharp prickles. Foliage is light gray-blue in color, noticeable at a distance.

Coulter pine rarely exceeds 80 ft in height and tends to have a more conical shape to its crown. Needles are also 6-10 inches long but lack the gray-blue coloration of gray pine. Coulter pines are notorious for their large cones; by weight, these are the largest cones in the genus. Cones can range 8-16 inches long and are heavily armored with large prickles similarly to gray pine cones, but coulter pine cones are heavier and can weigh up to 10 pounds!

Coulter pine cones can be highly variable in size

Like many of their relatives, gray and Coulter pines each show a wide range of variability in their cones, even on the same tree! Coulter pine cones tend to be longer, with a lighter coloration. Gray pine cones tend to be stout and darker brown, but without a side-by-side comparison of two specimens from trees with a confirmed ID, identification by cone alone is a challenge.

The Tree Inventory Project has measured a handful of pines bearing extraordinarily large cones this summer, in Berrydale Park and in Peninsula Park. The identification of these trees is still up for debate! Want to check out two confirmed specimens? Heritage tree #181 is a Coulter pine in the right-of-way at 5352 SE 37th Ave. Heritage Tree #239 is a gray pine in the right-of-way at 4074 N Massachusetts Ave.

Curious about what other oddities and lookalikes are hiding in plain sight in our urban forest? Join the Tree Inventory Project as we map, measure, and identify the trees of Columbia Park, Lincoln Park, Laurelhurst Park, Fernhill Park, and more! Register for workdays on the Inventory website.