Native to California, giant sequoias (Sequoiadendron giganteum) and coast redwoods (Sequoia sempervirens) are both large-form conifers also easily found in Portland’s urban forest. With common names that can be used interchangeably, the two are often confused or thought to be the same tree and they share many similarities. Both are notorious for their longevity, have thick, reddish bark that serves as a natural defense against wildfires, and are iconic symbols of the western U.S.

Along with the dawn redwood (Metasequoia glyptostroboides), giant sequoias and coast redwoods make up the Sequoioideae family. All three trees are known for their longevity, impressive size, egg-shaped cones, and reddish bark.

Giant sequoias have blue-green, awl-shaped needles arranged spirally along the shoot. Cones are 1.5-2.5 inches long, with dense woody scales. The bark of sequoias is light reddish-brown, with a soft, spongy texture. The trunk of the giant sequoia is massive and can reach upwards of 30 ft in diameter. By volume, giant sequoias are the largest trees on the planet. 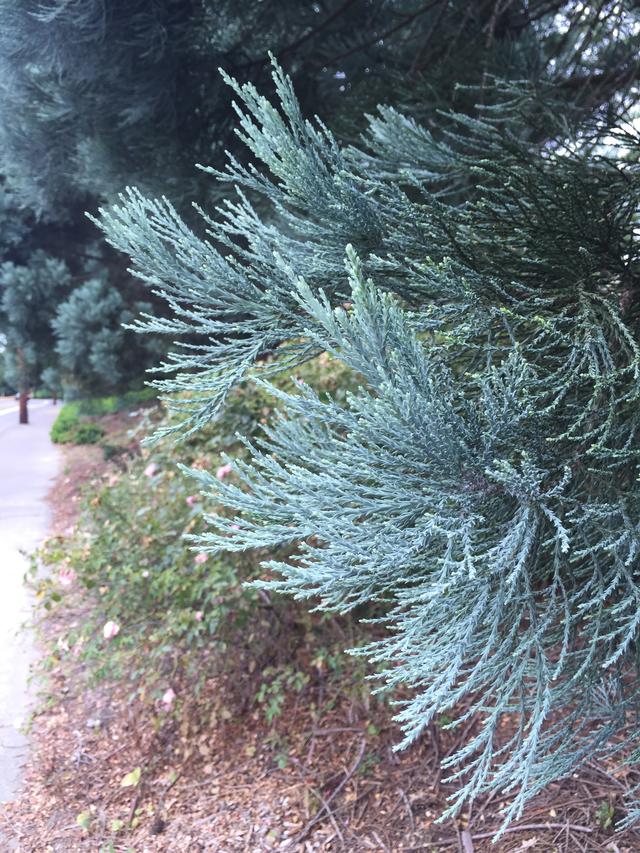 The blue-green foliage of the giant sequoia is distinctive, as are the awl-shaped needles

Coast redwoods also have cones that are made of woody seed scales and are egg-shaped; however, their cones are only half an inch to an inch long. The needles of the coast redwood are two-ranked, meaning they are arranged horizontally in pairs along a central shoot, similar to firs, and are a dark, glossy green. The bark of the redwood is much darker in color than that of the giant sequoia. Coast redwoods are the tallest trees on the planet, reaching over 300 ft tall along the northern California coastline. Although they are massive trees, redwoods don’t grow to the same diameters as sequoias in habitat. Both species can live to be over 2,000 years old. 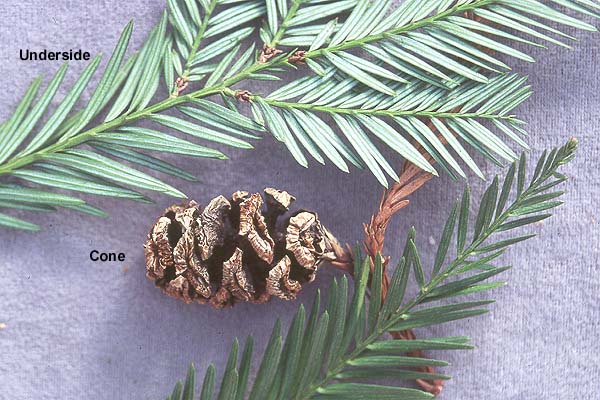 Redwoods have alternately-arranged needles that lay flat. Cones are small.

Giant sequoias have a very small natural range, limited to the western flanks of the Sierra Nevada. Growing in Kings Canyon, Yosemite, and Sequoia National Parks, these giants are accustomed to hot, dry summers and are shrouded in heavy snow pack during the winters.

Coast redwoods also have a limited natural range and are found alongside the Pacific Coast in northern California and southern Oregon. Redwoods are the tallest trees in the world and grow cloaked in fog that rolls through their canopies as warm air masses are cooled by the Pacific Ocean. With rainy winters and warm summers tempered by constant moisture from marine fog, redwoods have an incredibly long growing season, aided by their ability to pull moisture from the air.

With native ranges that encompass habitats totally different from the Mediterranean-climate of the Willamette Valley, how do sequoias and coast redwoods fare in Portland? Portland does not have the elevation or snowpack that the Sierra do, or coastal fog to the extent that is seen along the northern California coast, where champion redwoods thrive. Despite this, we’re finding that redwoods and sequoias do well in the city. Almost 500 sequoias and redwoods have been inventoried by the tree inventory project and 93% were rated as being in good or fair condition. These trees thrive in our urban forest, and as large-form evergreens, they provide us with enormous public health and environmental benefits. A mature giant sequoia in Portland can store over 6 tons of carbon and scrub pounds of pollutants from the air annually.

As our average summer temperatures continue to rise and summer drought conditions stretch longer each year, we need to plant trees that are resilient to these conditions. Sequoias and redwoods are well-adapted to survive our dry summers as long as they can reap the benefits of the rains in the winter. Their longevity gives them a permanent place in our urban landscape; Portland’s established sequoias and redwoods have the potential to outlive every human resident in the city.

Want to check out some of Portland’s sequoias and redwoods? Check out the Tree Inventory map. Want to see the biggest and best? Seven sequoias and four coast redwoods are recognized as Heritage Trees. In Laurelhurst Park, the walking path along SE Oak St features all three members of the Sequoioideae family – dawn redwood, giant sequoia, and coast redwood.

The Tree Inventory Project is a partnership with volunteers to map, measure, and identify Portland’s trees. Join us in a park near you!