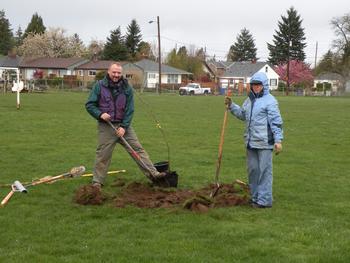 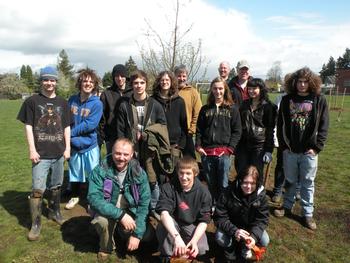 Eight years ago, a Learning Landscape arboretum was created at Alliance High School at Meek in the Concordia neighborhood of NE Portland. The Concordia Arboretum came about when a small group of Neighborhood Tree Stewards, known as the Concordia Tree Team, partnered with several groups. These groups included: Portland Parks and Recreation (PP&R) Urban Forestry, Friends of Trees and Meek School. The partnership aimed to turn a treeless, empty field into a place where trees from around the world could help students learn about botany. PP&R Urban Forestry played an important role in agreeing to establish the new trees by watering them for two summers after planting.

As important as those first two years of summer watering were, experience has shown that three-year-old trees in the open, sunny, wind-exposed field were subject to drying out and dying in Oregon's dry summers. Past planting attempts in the area had left only two struggling survivors-a ginkgo and an oak. Determined that this planting would survive to provide the long-term benefits of mature trees, the Concordia Tree Team made summer watering of the trees at Meek its top priority.

Initially members carried containers of water to the trees from their cars, but soon got agreement from the school to use the school’s water taps and store hoses in a locked area. Weekly from June on, a core group of tree stewards faithfully dragged out the hoses and watered all the trees three years and older. This task takes about 1.5-2 hours. 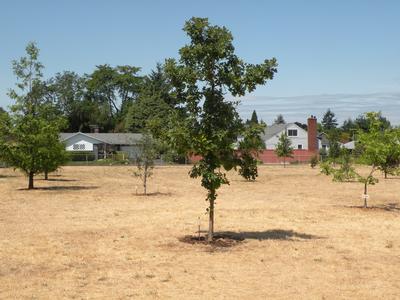 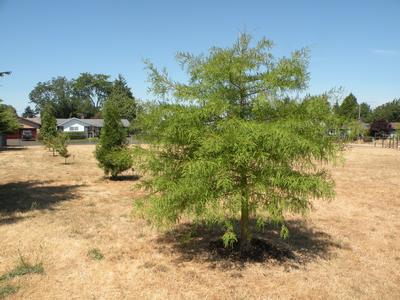 The result has been that of over two dozen trees planted in stages at the school, none that were watered by the tree stewards has died of drought! Beyond merely surviving, the ample weekly watering has allowed the trees to grow during dry months when lack of water typically shuts down or slows most Oregon tree growth. Many trees have put on a foot or more of growth each summer, especially those from summer-rainfall climates. Even normally slow growers, such as umbrella pine (Sciadopitys verticillata), have shown healthy growth for their species. Some of the trees planted as one or two-gallon sizes have reached six feet or taller in just a few summers. The photo below shows a Google street view of the campus in 2015, five years after many of the trees were planted.

Once a blistering hot space in full sun, now the Meek campus has enough tree cover that small pools of shade provide a place for the many visitors to the area to cool off. Pet owners and parents stand in the shade of these young trees on hot days watching their dogs or children playing.

The tree stewards credit the success of an eight-year watering commitment to holding monthly face-to-face meetings, and continual group emails where people commit to different weeks. People often water together, helping to make it a social occasion rather than a chore. The donation of more hoses by individual tree stewards has also meant that most trees can now be reached by hose. This eliminated the time-consuming need to fill and transport heavy water containers. Only about six trees on the perimeter of the school still need water carried to them. The 2018 Google aerial view below shows the location of the trees. 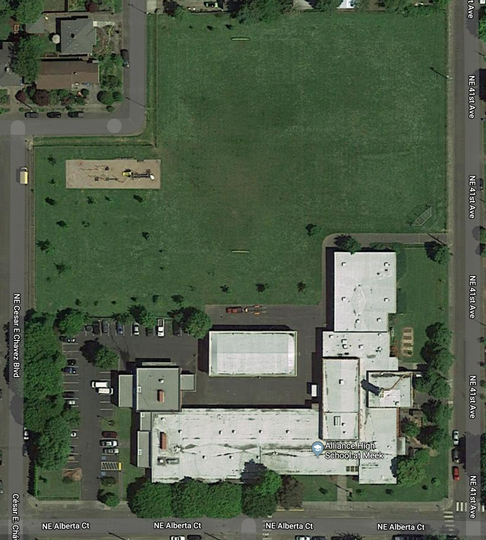 With much of Oregon again officially in drought this summer, the lesson from Concordia is that for the initial investment in planting trees to pay off, most newly planted trees should be watered their first several summers. The results are lush, healthy, faster-growing trees. In turn, these trees will help keep people cool as summers grow hotter.