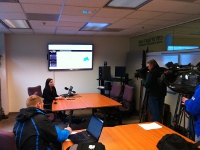 The second attempt to launch a citywide test of Portland’s community notification system is complete. The exercise began at 11:00 a.m. Thursday, February 9, 2012, with private vendor First Call officially contacting all the targeted 328,427 devices across the city by 5:50 p.m. The company earlier predicted it could complete the test within three hours. It is possible First Call may have overestimated the call-load capacity associated with Portland’s local landline phone infrastructure. During First Call’s previous attempt at this test last month, it reached less than one percent of the targeted population before its own system halted.

“We’re relieved that First Call overcame its technical problems and pulled this off. We now have reasonable confidence this system can reach any number of Portlanders when needed,” said Portland Bureau of Emergency Management (PBEM) Director Carmen Merlo. PBEM serves as the notification system’s administrator. “Of course, we would never rely on this system as our sole means to reach a huge population quickly during a major emergency. We lean on broadcast media, the Emergency Alert System, social media and other channels for that. But it’s good to know First Call can perform at this scale.”

During today’s re-test, PBEM was able to launch a single test message through First Call to all landline phones, as well as all cell, text and email subscribers who voluntarily registered their contact information at PublicAlerts.org. First Call has had success quickly launching notifications to Portland residents during small-scale emergencies over the past year-and-a-half.

Merlo encourages Portlanders to register for all future notifications by signing up at www.PublicAlerts.org. Personal contact information provided during registration is kept private and used only for the purpose of sending geographically tailored emergency messages.