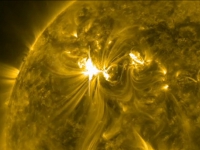 The following is from a web article on SPACE.com posted March 7, 2012.

A massive solar flare that erupted from the sun late Tuesday (March 6) is unleashing one of the most powerful solar storms in more than five years, a solar tempest that may potentially interfere with satellites in orbit and power grids when it reaches Earth. "Space weather has gotten very interesting over the last 24 hours," Joseph Kunches, a space weather scientist at the National Oceanic and Atmospheric Administration (NOAA), told reporters today (March 7). "This was quite the Super Tuesday — you bet."

Several NASA spacecraft caught videos of the solar flare as it hurled a wave of solar plasma and charged particles, called a coronal mass ejection (CME), into space. The CME is not expected to hit Earth directly, but the cloud of charged particles could deliver a glancing blow to the planet. Early predictions estimate that the CME will reach Earth tomorrow (March 8) at 7 a.m. EST (1200 GMT), with the effects likely lasting for 24 hours, and possibly lingering into Friday, Kunches said. [more]