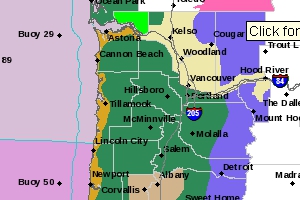 The National Weather Service has issued a Flood Watch for portions of northwest Oregon and southwest Washington, including the Portland metro area, through Saturday afternoon (3/31). Heavy rain is expected Thursday though early Saturday with one to three inches expected in the Willamette Valley. It's possible parts of the Coast Range and Cascade foothills will receive from three to seven inches of rain. Flooding is possible through Saturday on some of the coastal rivers, Willamette River tributaries and the mainstem Willamette south of Salem.

Landslides and debris flows are possible during this flood event. People, structures and roads located below steep slopes may be at serious risk from rapidly moving landslides. You should monitor later forecasts and be alert for possible flood warnings. Those living in areas prone to flooding should be prepared to take action should flooding develop.

Visit the National Weather Service for an updated forecast.