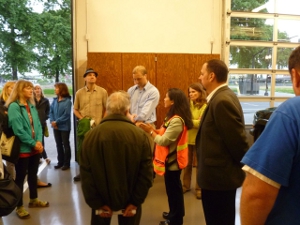 The Portland Earthquake Project hosted a free walking tour for the public in Portland’s Old Town on Tuesday, June 12th. During the tour, experts in the fields of engineering and geology described seismic challenges and successes at four different sites.

The tour began at the Mercy Corps Action Center and included the Burnside Bridge, the harbor wall along the Willamette River and Portland Fire Station 1. A similiar event occurred in April with Mayor Adams participating. Click here to watch a video from the April tour.