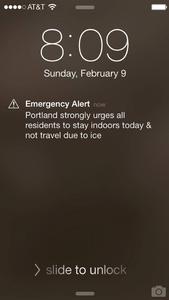 On Sunday (2/9) at 8 a.m. the City of Portland used a federal system called Wireless Emergency Alerts - or WEA - to warn residents to remain indoors and avoid traveling due to icy conditions. The system, which is free for public agencies to use, sent a special alert tone and a 90 character message to all WEA-enabled cell phones in Multnomah County with the message: "Portland strongly urges all residents to stay indoors today & not travel due to ice."

"The freezing rain came earlier Saturday than had been predicted and the latest expectation was for more after 10 a.m. Sunday morning," Transportation Director Leah Treat said. "The icy condition of sidewalks, in addition to the already slick roads, were key deciding factors in sending out the alert," Treat said.

"It's easy to slip and fall on sidewalks right now," Treat said Sunday morning. "Our crews are saying the roads are treacherous. We appreciate the public's patience and we would not do this unless we felt it was an absolute necessity. Our crews continue their hard work, plowing and sanding streets all over Portland."

Sunday marks the first time WEA has been used by the City of Portland. The system has been previously used locally by National Weather Service to issue warnings, and for the AMBER Alert program. Portland, through the Portland Bureau of Emergency Management, became the first local government in the region to gain the ability to launch WEA in 2012. At this time, WEA alerts can be received by most, but not all cell phones. At this time alerts can only be received by WEA-enabled phones.

"WEA is one of many emergency communication tools used by Portland officials when public safety is at stake," Emergency Management Director Carmen Merlo said.

In addition to WEA, Portland also has access to the Emergency Alert System - or EAS - on television and radio, and the Community Emergency Notification System - or CENS - through the website PublicAlerts.org able to send a message to landline phones, and cell phones and email addresses after residents sign up.