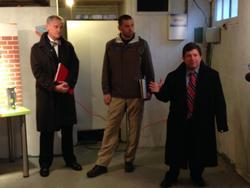 Congressman Earl Blumenauer, Portland City Commissioner Steve Novick and Clean Energy Works (CEW) CEO Derek Smith today announced a new pilot project that will give a group of Portland homeowners the opportunity to upgrade the seismic safety of their homes.

"I've been focused on disaster preparedness since coming to Congress," said Congressman Earl Blumenauer. "Whether it's wildfire, flooding, or the inevitable earthquake, advanced planning and preparation are critical. This pilot program for seismic upgrades empowers homeowners while reducing risk to our communities and strained relief resources."

"When the earthquake comes, for the city to survive, we will need Portlanders who are prepared to ride out the disaster and stay here," said Portland City Commissioner Steve Novick. "People who lose their homes are much less likely to stay. An investment in seismic strengthening of houses is a critical investment in the future of Portland. I very much appreciate the fact that Congressman Blumenauer, and the State, and FEMA all understand that point."

Portland homeowners in the pilot project will receive funds to cover approximately 75 percent of the cost of the seismic upgrades. The goal is to test the feasibility of including seismic upgrade services as part of overall home upgrades provided through Clean Energy Works in the future.

"Before we opened our doors in 2009, only 200 Oregon homes a year were receiving whole home performance upgrades, but today we have upgraded 3,500 homes and counting," said Derek Smith, CEO of Clean Energy Works. "Adding seismic services is part of the Clean Energy Works 'whole home performance,' strategy to improve the comfort, health and safety of Oregonians' homes."

The City of Portland estimates there are about 100,000 Oregon homes in need of seismic upgrades. Older homes may be vulnerable to structural failure if they're not bolted to their foundations. In fact, severe ground shaking during an earthquake may cause these homes to collapse entirely. Fortunately, in some cases, low-cost improvements can greatly improve the stability and integrity of these homes.

"The most important and cost effective part of a seismic upgrade is to make sure the home is adequately bolted to the foundation," says Ryan Clemmer, Director of Building Science for Clean Energy Works. "You want to be sure that your home doesn't slide off its foundation during an earthquake."

Single, working mom Stacey Schubert purchased her home 11 years ago. She's already had an energy upgrade through Clean Energy Works and is looking forward to increasing the safety of her home as a pilot project participant.

"My house is my biggest investment, and one of my worst fears is losing it to an earthquake," said Schubert. "A seismic upgrade helps protect my home and make it safer for my family."

For the eligible pilot homes, Clean Energy Works will oversee the upgrades, working closely with the City and CEW-certified contractors Neil Kelly and Greensavers, who helped identify potential pilot participants and will perform the work. Homeowners interested in seismic safety and whole performance upgrades as part of a future Clean Energy Works should visit www.cleanenergyworksoregon.org/seismic to sign up for updates and learn more.