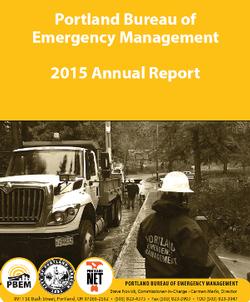 2015 was a busy year at the Portland Bureau of Emergency Management (click here to review our annual report). Over the past 12 months, we:

Please take a few minutes and review our annual progress report for an update on what we've been doing.

And if you want to see where we're headed, check out our three-year strategic plan. Look for an update to the plan later this year.