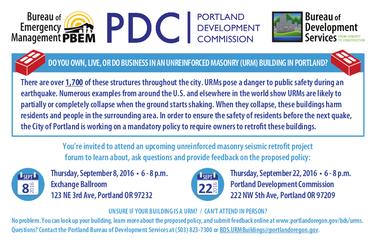 On Wednesday (8/17), Portland released a draft proposal to require the seismic retrofit of the city’s 1,700 public and privately-owned unreinforced masonry (URM) buildings (click here to learn more). URM buildings are typically structures built before the 1960s using brick with little to no steel reinforcement in the walls that are highly vulnerable to collapse even during a moderate earthquake.

“We know Portland is in earthquake country, and that URM buildings pose a direct danger to the public when the ground starts shaking,” said Commissioner Steve Novick. “Portland City Council has a moral imperative to listen to the guidance of scientists, engineers, and emergency managers and take action now to save lives before the next quake.”

“Portland’s current seismic building code, policies, and procedures have not been effective at reducing the city’s stock of URM buildings,” said Paul Scarlett, BDS Director. “The proposed policy positions Portland to reduce the danger in the coming years.”

“Several cities on the West Coast, including San Francisco and Los Angeles, already have similar policies in place,” said Carmen Merlo, PBEM Director. “Portland can learn from the example set by these communities.”

Information about the proposal, along with a searchable URM map, is available at http://www.portlandoregon.gov/bds/urms. Portland is also hosting two forums to allow the public to ask questions and provide feedback: