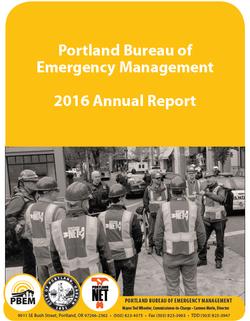 2016 was one of PBEM’s busiest years ever as we finished up long-term projects, expanded several of our programs, and managed the Portland Emergency Coordination Center (click here to review our annual report). Here are some of the milestones and highlights. Over the past 12 months, we:

Please take a few minutes and review our annual progress report for an update on what we’ve been doing.

And if you want to see where we’re headed, stay tuned for an update to our three-year strategic plan. We’re planning to release it in the next few months.