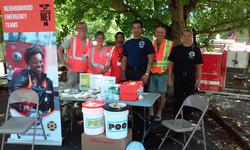 The Portland Bureau of Emergency Management is sharing the final results of a study conducted by DHM Research to look at how Portlanders are preparing for a major disaster (click here to view the results). The research was conducted from November 2016 to February 2017 and includes the results of a telephone survey, online survey, and two focus groups. Here are some of the findings: