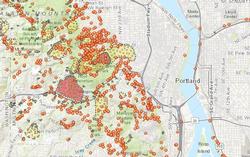 A new study identifies areas of Multnomah County where landslides are more likely to happen – and how many people and buildings are at risk when they do.

“Even a few inches of movement during landslides can cause serious damage,” says Bill Burns, engineering geologist and lead author of the Oregon Department of Geology and Mineral Industries (DOGAMI) study. “Thousands of landslides have occurred in Multnomah County since the 1970s, and are continuing to happen every year.”

The study, which included the cities of Portland, Gresham, Troutdale, Fairview, and Wood Village, shows areas where taking action to reduce landslide risk could make a big difference. About 37,000 people live, and about $8.7 billion in buildings and land value are located, in areas with high landslide susceptibility. About 6,700 of those people and $1.65 billion of building and land value is atop land that’s actually slid in the past.

For example, land that has slid in the past is more likely to slide again in the future. The study used lidar, which offers a detailed look at the earth’s surface, to help identify where past landslides occurred. The study’s new lidar-based landslide inventory maps show more than 7,000 past landslides – ten times as many as research teams mapped after 1996-1997 storm events. The study also used new geology data to create landslide susceptibility maps, which show areas where landslides are more likely to occur in the future.

“Overall, the study shows significant landslide risks in some areas of Multnomah County,” Burns says. “It’s important to continue working to reduce our landslide risks, and there are steps we can all take to do that.” Get started by using the interactive study maps to find out if your home, work, or travel routes are in areas more likely to have landslides. Learning to identify landslide warning signs, and being proactive in avoiding and addressing landslide hazards, is also important. Last year, DOGAMI and the Washington State Department of Natural Resources created a guide to help identify and reduce landslide hazards around the home. The guide and interactive maps are available at OregonGeology.org.