As many as 44 families facing homelessness will soon have a place to call home in the Pearl District, thanks to a new housing development from the Portland Housing Bureau (PHB). On Friday, June 16, the 93-unit high rise broke ground on City-owned property at NW 14th Avenue and Raleigh Street (below).

The project will provide 44 family-size units dedicated to serving the lowest income households—those at or below 30 percent of the area median income ($22,410 for a family of four), plus another 62 units for households up to 60 percent of the median income ($35,880 for a two-person household). Ground-floor common areas will feature a community room, indoor and outdoor play areas, a laundry facility, and on-site resident support services.

“Kids need a safe, stable home to do their best in school and in life. Our housing crisis has left too many families displaced and facing the prospect homelessness,” said Mayor Ted Wheeler, who oversees the housing bureau. “Creating opportunities like this for these families to put down roots in one of our great neighborhoods is a long-term, generational approach to preventing and ending homelessness in our community.” 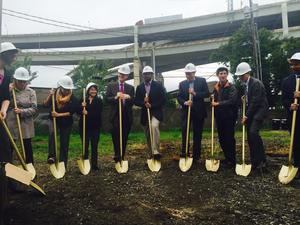 PHB selected a proposal for the site from nonprofit developer Innovative Housing, Inc (IHI) in October 2015. “Innovative Housing is very excited about breaking ground on 93 new homes for families who desperately need safe, stable, and affordable housing,” said Sarah Stevenson, Executive Director of Innovative Housing. “This development represents a significant commitment by the City of Portland to families who are struggling and we are proud to be part of the team that is making it happen."

A 2015 report on homelessness in Portland and Multnomah County showed a growing number of unsheltered families with children. Families with children also accounted for a disproportionate percentage of the estimated 12,000 people who were “doubled up” in housing or living in motel rooms on any given night.

“The City’s commitment to affordability in high opportunity areas has made this one of the most economically diverse neighborhoods in the city. This project is going to give kids an opportunity to grow up near parks and schools, and the amenities that make life better for families,” said Commissioner Dan Saltzman, who oversaw the project selection as housing commissioner in 2015.

PHB acquired the vacant parcel at a discount from private developer Hoyt Street Properties (HSP) in 2015 as part of a longstanding affordable housing agreement between HSP and the City of Portland. The project will further affordable housing goals set forth for the River District Urban Renewal Area.