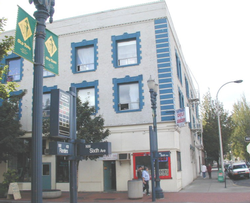 The Portland Housing Bureau (PHB) has announced it is in the process of purchasing the Westwind Apartments for reconstruction with Portland’s Housing Bond.

“The Westwind provides an increasingly scarce type of housing that is vital to our efforts to tackling homelessness in the central city. Funding these kinds of housing solutions for our most vulnerable neighbors is extremely important to me,” said Mayor Ted Wheeler. “We’re thankful to Multnomah County for their generous partnership. Collaboration between the City of Portland and Multnomah County is essential to create supportive housing. I am confident we have the right infrastructure to address a fast-growing population with extreme needs.”

For decades, the Westwind’s low-cost, low-barrier housing has been a vital asset for many social service agencies operating in the central city.

“I’m thrilled about the purchase of the Westwind. It has provided housing for some of our most vulnerable residents,” said Bond Oversight Committee member Susan Emmons, who previously served as the Executive Director at Northwest Pilot Project. “Because of its low-barrier housing, it became one of the only options for people that we served.  The location is important because it is so close to service providers who refer people to the building.”

“The Westwind is one of the last remaining Single Room Occupancy buildings providing low-barrier unregulated affordable housing in the central city. We’re grateful to have this opportunity to buy it and replace the housing with safe, high-quality, long-lasting homes with support services,” said Portland Housing Bureau director Shannon Callahan.

The project helps further the commitment by Portland and Multnomah County to create 2,000 units of Supportive Housing by 2028. Supportive Housing — which combines deep affordability with intensive care, including mental health and addiction services — is part of the local strategy for ensuring chronically homeless neighbors can leave our streets and remain stably housed.

The Westwind acquisition marks the second supportive housing project in recent weeks that joins City and County funding. That speaks to the cooperation and coordination that meeting the 2,000-unit goal will require.

“The solution to chronic homelessness is supportive housing, and in places where people can reconnect with their community,” said Multnomah County Commissioner Lori Stegmann. “I’m thrilled the County’s contribution is making that possible for some of our most vulnerable neighbors.”

PHB expects to bring the acquisition to Portland City Council for approval later this fall. For more information, visit www.portlandhousingbond.com.