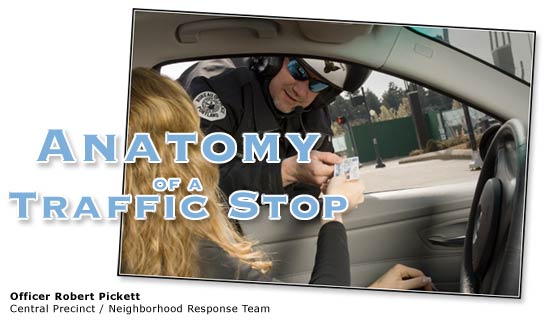 Everybody has a traffic stop story. For many people, a traffic stop is one of our only chances to personally interact with an officer. Thus, the impression is a lasting one:

For an officer, a traffic stop is a routine, often forgettable task. But it is also one of the most routinely dangerous, as officers usually have little idea if we are stopping Dad on his way to work or someone who just robbed a bank, willing to do whatever it takes to escape.

So we train our officers to be extremely careful, and to use every tactical advantage they can find, no matter how small. Being blinded by spotlights or having to crane your neck around to see an officer may feel unnecessary or even rude, but that is not the officer's intent. They are simply doing their best to stay safe.

The following is a traffic stop story, from an officer's perspective.

You're being Pulled Over
What should you do?

I look at the cross street as I approach-yep, definitely a 4-way stop, and the car definitely didn't stop-heck, it didn't even appear to slow down. I'm positive I have probable cause to stop the car if I would like.

I check the computer. I have no calls waiting for my attention, and amazingly, the patrol cars in the districts close to me are also free. If I make this traffic stop, other cars are available to take 911 calls in the area while I'm busy, but more importantly, if the driver is trouble and I need help quickly, it is close by.

It's a relatively quiet side-street, so I have no trouble getting behind the green Nissan. (I see lots of traffic infractions that I choose not to do anything about because the maneuvers required to get behind the violator are too dangerous and not worth the risk.)

Looking ahead, I try to anticipate a safe place for the stop. If I flip on my lights as we approach the top of a hill, the driver might stop just over the crest, leaving us easily rear-ended by other traffic approaching from behind. In this case it is flat, but there are parked cars on both sides, leaving no room to pull over out of the traffic lanes. I follow a little longer and see an empty parking lane on the block ahead-maybe we can attempt to pull over in that space.

I pick up my radio mike and announce my intentions to dispatch.

Now if things go wrong, the dispatcher has the car's license plate and my location.

I take off my seat belt and then flip on my overheads, followed by tap on the air horn just to get the driver's attention. A couple seconds, then brake lights--the driver sees me. The right signal goes on and the driver pulls over to the right. We overshot the space I was aiming for by a block, but no time to think about it now, as I'm anxious to escape my coffin.

"Your car is your coffin" was the unforgettable phrase from the academy. It sounds extreme, but it was meant to remind us not to get trapped in our patrol car, fumbling to release the seat belt, as a person from the car we are stopping jumps out to attack us.

I flip the front-facing flood lights on, swivel spot light and high-beams on. I pull in about a car-length behind the Nissan, but slightly offset to the left to provide me some protection from other cars approaching from the rear, pushing on the brake, forward motion stopping and throwing it into park, turning the wheel hard left and opening the door and getting out, out, out. Coffin exited, I take a breath. I can easily move, access my weapons, and see what is going at the Nissan. If another car hits us from behind, my left-turned wheels will hopefully direct my car away from me. I aim my spotlight from the outside of my car. Even during the day the bright lights provide some concealment from an occupant in the Nissan who might be trying to see where I am, planning an attack or escape. At night they are blinding.

"722, we landed at two-eight and Salmon" I announce into the radio mic on my shoulder, making sure dispatch and other cars in the area know my updated location.

"722, two-eight and Salmon," the dispatcher confirms that she heard my location.

I close my door softly. Why give the occupant a hint that I'm coming?

I approach the Nissan steadily but carefully, my attention torn between the unknown person I'm approaching and a car I hear approaching from behind-hopefully, the passing driver will give us plenty of space. I pull up on the Nissan's trunk as I pass, to be sure that it is latched and that nobody will pop out of it behind me. I glance in the left rear window-definitely nobody in the back seat. I stop just behind the pillar that separates the two side windows. The driver already has his window down, and thankfully, thoughtfully, has both his hands on the steering wheel.

"Hi, I'm Officer Pickett. The reason I stopped you is because you ran a stop sign a few blocks back. May I see your driver's license and proof of insurance?"

The driver has been craning his neck around to see me standing slightly behind him-uncomfortable, but all the more difficult for him to suddenly point a gun at me. He says sure and leans over and dives into his glove box with both hands. A perfect place to hide a weapon, this immediately puts me on guard, but many people do this, so it isn't completely out of the ordinary, and I haven't noticed anything else unusual inside his car or by the way he greeted me. I'm dialing back my threat meter and decide not to say anything about it. Some drivers tell me that their insurance card is in the glove box before getting it, which always makes me feel good that the driver is sensitive to my safety concerns.

He finds the documents and hands them to me. As I take them I'm careful not to reach into his car, as I don't want him to grab me or trap my hand by rolling up the window. I ask him to please stay in his car while I check his license--that way he's contained, and if he gets out for some reason, I get the warning of his door opening. I take the documents back to my car, glancing back at the Nissan every few steps as I return, just to keep an eye on him.

I sit down in my seat, but keep my door slightly open with one leg out. I use my computer to run the plate on the car and see that it belongs to the driver. The insurance card appears valid. I run the driver and see that he is not wanted for any crimes, has a valid Oregon license and only one ticket in the past few years--for Failing to Obey a Traffic Control Device (which could be anything from running a stop sign or red traffic light to changing lanes over a solid white line). I fill out the citation, which takes a few minutes, particularly because I stop every few seconds to look up and check on the Nissan.

The dispatcher is checking on me...I must be taking a little longer than usual.

The dispatchers have timers that start when an officer goes out on a traffic stop to remind them to check on us. If I hadn't responded to her queries, she would have sent the closest two free patrol cars to check on me, and they would come with lights and sirens.

Checking for passing traffic, I open the door and stand up, and again quietly shut the door. I approach the driver's side of the Nissan.

"Mr. Alexander I do have a citation for you today. Your arraignment date is printed in the corner, though, if you can't make it on that day, you have some other options that are described on the back of the citation. There is also a phone number on the back that you can call if you have questions." He looks irritated, but says ok and doesn't appear to want to argue with me.

I return to my car and watch as he drives away.

Why so gruff?
The police live in the world of possibility, not probability. Ninety-nine-point-nine percent of the time, the above description is exactly the way a traffic stop goes. But on very rare occasion, instead of being met with a nervous smile, officers are greeted with a gun at the driver's window. This has happened in Portland. I know officers it has happened to. And that is the possibility for which I always prepare, in order to return safely to my family at the end of my shift.

This seriousness and initial distrust can make an officer come across as curt or unfriendly sometimes. Please know that it isn't personal, it's just playing it safe.

What about bicycles?
Stopping bicycles is somewhat safer for officers, because we have a better view of what the rider is doing and there are fewer places to hide weapons. But it is always serious. Criminals ride bikes, too. And weapons can be concealed in clothing. When I stop someone who is riding a bike, I usually ask them to dismount and sit on the curb. It's usually more comfortable for the rider and it gives me a warning if they decide to get up and run or fight.

How should I behave?
The best approach when being stopped is to be human and considerate and responsible. Pulling over into a safe place and keeping your hands on the steering wheel and/or out of your pockets tell the officer that you empathize with his or her safety concerns. Turn off the radio. And remember that your officer has heard every excuse for violating the law-if you were speeding, an honest apology and willingness to take responsibility can be refreshing. It might even earn a warning.

What if I disagree with the ticket?
Of course officers make mistakes on occasion-they're human beings. Or there might have been extenuating circumstances. But if you disagree about the violation, arguing the ticket on the spot in traffic can be dangerous for everyone-save it for court. That is exactly what a judge and the judicial system are for.

Don't officers have better things to do?
The Portland Police Bureau has many units that are tasked with investigating various crimes. We have homicide detectives, a child abuse unit, a sex crimes unit, a drugs and vice unit, etc. The Traffic Division's primary job is to investigate major traffic crimes and crashes, and to enforce traffic laws. Conducting traffic stops, often at problem locations called in by neighborhood residents, is what they do. And while an officer may not be at that problem location all the time, hopefully, his or her periodic presence it will raise awareness of some drivers, who will slow down/stop for the yellow arrow/go the right way next time.

In addition, officers assigned to the Patrol function (who answer 911 calls), will often do traffic stops between calls to assist the Traffic Division in responding to one of the most common complaints of Portlanders-traffic issues.

So the answer is no, they don't have better things to do--if you are stopped by an officer it means they are proactively doing their job (and not simply driving around waiting for something to happen).

And if a big emergency call pops up nearby that IS a better thing to do, they will definitely go to that instead, perhaps even leaving you before they have a chance to finish writing the ticket!