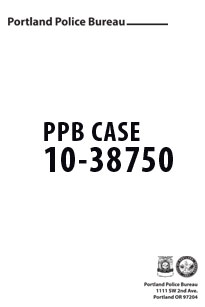 On Thursday, May 13, 2010, at 11:45 p.m., officers responded to Northwest 2nd Avenue and Northwest Everett Street after a caller to 911 requested police check on a man individual spitting on passing vehicles and acting strangely.  Three more citizens contacted the officer about the subject of the 911 call just prior to the officer locating the man on Northwest Everett Street. The first arriving officer immediately asked his cover officers for a faster response.

When the officer contacted the man, he immediately put his fists up to a fighting stance, approximately six inches from the officer's face.  The officer pushed the man's hands away and told him to back up.  The man refused to back away from the officer.  The officer attempted to use a burst of pepper spray, but due to the windy conditions the pepper spray did not affect the subject.  The man backed up, but kept his fighting stance.  Eventually, the man subject walked backward into traffic on Northwest 3rd Avenue.  He continued to focus on the officer with clenched fists and bounced on his feet like he was boxing.

The officer then pointed his Taser at the man and told him to sit on the sidewalk or he would be Tased.  As the cover officers arrived, the first officer warned them he was going to Taser the man.  The Taser can be very helpful to cover officers as they are able to quickly take a subject into custody without fighting.  In this instance, however, the man spun around to the ground on his back and pulled his arms and legs up into himself.  The officer used his Taser again as he told the man to put his arms out in order to be handcuffed.

The man refused and continued to keep his arms close to his chest while keeping his feet up to kick at the officers. The officers were concerned that the man was continuing to resist them as they were now in the middle of Northwest 3rd Avenue in the path of vehicle traffic.  The officer used a third Taser cycle. The man extended his arms and he was taken into custody at that time. The officers were able to prevent any injury to the subject or themselves because the Taser afforded the officers enough time to get the subject handcuffed before the electronic cycle ended.

Medical personnel initially responded to the scene to remove the Taser probes from the man.  During this entire encounter, the man was mumbling and chanting incoherently.  Officers requested the medical personnel also evaluate the man as they were unsure if he was affected by drugs or another condition that would require him to be transported by an ambulance.  At the conclusion of the medical evaluation, the officers recognized the man needed a mental health evaluation and transported him to Good Samaritan Hospital in lieu of the Multnomah County Detention Center for the Disorderly Conduct charge.