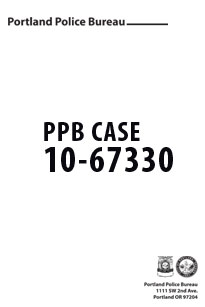 On Sunday, August 15, 2010, at 1:53 a.m., three officers responded to an apartment complex on Southwest 13th Avenue after an apartment complex employee heard an occupant calling for help from one of the apartments.  Officers approached the apartment door and heard faint sounds coming from inside.  The officers knocked on the door several times and announced their presence.  The subject finally answered, but the officers could not understand him.  The officers could hear the subject groaning and were worried that he was in need of medical assistance.  They opened the door with a complex master key as they announced again they were the Portland Police.

After the man was handcuffed the officers were able to evaluate him and realized he was dazed and confused.  They saw that he was breathing hard and had a glazed look in his eyes.  An officer asked the man if he had any medical conditions.  The man was able to tell him he was a diabetic.  The officers then requested an immediate medical response to their location.

After medical personnel provided treatment for low blood sugar, the man was transported to the hospital for further evaluation.  The subject did not have any injury from the Taser.  Being able to quickly get the man handcuffed allowed the officers to discover the cause of his aggression, which turned out to be a medical condition.  A prolonged physical fight with the subject could have caused injury to him and delayed the medical treatment he needed.