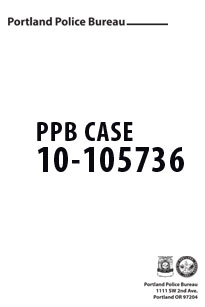 On Sunday December 26, 2010, at 9:54 p.m. two officers went with members of Project Respond (Cascadia Behavioral Healthcare) to an apartment complex on Northwest Broadway so the mental health care workers could evaluate a male subject.   The Project Respond employees were familiar with the subject and told the officers he was known to light things on fire in the past.

When the officers reached the hallway to the subject's room, they could see burnt paper on the floor and items scattered around the area in front of the open door to his room. The officers saw the subject in his room and asked him to come outside his room which he did.  The subject also allowed the officers to check his pockets for sharp objects and followed their direction and seated himself in the hallway.

During this interaction with the police and Project Respond employees, the subject continued to say things that did not make sense.  He talked about arson and being an "Indian."  He made odd grunting noises, yelling and becoming defiant.  He called one of the Project Respond workers a "white bitch."

The Project Respond employees determined that the subject should be taken to the hospital for further evaluation on a mental health hold.  As the officers took a hold of the subject's arms and stood him up to be handcuffed, he began to tense up.  He tried to pull his arms out of the officer's grasp and fought against the officers' efforts to get his hands behind his back to be handcuffed.

One officer drew his Taser and applied the Taser to the subject's back to cause him to release his hands from under his body.  The subject stopped briefly, but started to twist his body and pull away from the officers again.  The officer warned the subject several times that he would be Tasered and did Taser him additional cycles.  After each cycle, the officer stopped the Taser, and re-attempted to get a hold of the subject's hands.  The subject continued to resist the officers' attempts to control his hands.  After realizing the Taser was not having enough of an effect to cause the subject to release his hands, the officer used a closed fist and hit the subject in the right and left rib cage area. These strikes were also not effective.  The officers struggled with the subject for two minutes until they were finally able to wrestle his arms out and get him handcuffed.

Both Project Respond employees witnessed the struggle between the officers and subject.  They documented what they saw on their Hospital Hold form for the subject stating:

(subject) strongly resisted being frisked and being handcuffed- punching, kicking, fighting.  Police had to tase him.  (He is) unable to understand he being evicted-thinks he is in the witness protection program.

After the officers transported the subject to the hospital, the subject had to be placed in a four point restraint system by hospital security.  The subject had minor bruising and abrasions and the officer had injury and pain to his hand as a result of the struggles.