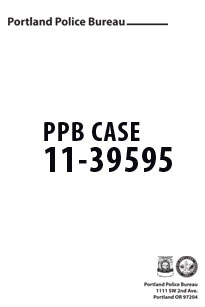 On Sunday May 15, 2011, at about 9:48 a.m. an a Portland Police officer assigned to East Precinct responded to 73rd and Southeast Yamhill on a man standing in the rain for over an hour.

Arriving, the officer saw the man standing in the rain next to a stop sign. The officer tried talking to the man but he was mostly unresponsive but did say something in Spanish.  The officer told the man "Uno Memento" and he walked back to his car to request the help of a Spanish-speaking officer.

When the officer went back to car and the man followed him and the officer tried to get him to wait, but the man put his hand up mimicking the officer.  The officer continued to step back.  The officer said he saw the man's forehead and jaw tense up and he thought the man was either going to swing at him or run away.

The officer said the man tightening his arms and fists and kicked at him.  The officer then took the man to the ground and the man resisted and he punched the man 7-10 time times to get the man to stop fighting him.  The man stopped resisting and the officer handcuffed the man.

Once the man was in custody the officer called for medical personnel to check the man for injuries and he learned that the man was the subject of a missing report.  Later, the officer learned the man had a mental illness.

There was a community member who was the original caller to 911 who witnessed the entire encounter and he said he believed the officer acted appropriately.