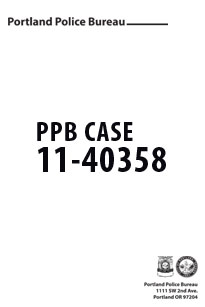 On Thursday May 17, 2011, at 4:59 p.m., officers responded to a residence in the 1900 block of Southeast 134th Drive to conduct a welfare check of a 69-year-old woman.  This call was in response to Multnomah County Adult Protective Services (APS) receiving a call from the woman's doctor who told APS that the woman called asking what to do after her son hit her in the head. APS told officers that the son has a history of assaulting his mother.

Officers opened the door to the house with the victim's consent and called several times for the suspect to come outside. Hearing no response from the suspect, officers began to clear the house and determined that the last place the suspect could be was in his bedroom.

Officers opened the bedroom door and saw the suspect lying on the bed. Officers told him several times to stand up and put his hands on his head but the suspect refused and said he was sleeping. Officers noted that the suspect's hands were down at his sides in the bed.

Officers gave the suspect verbal warnings about the possible use of a less lethal beanbag and the suspect stood up rapidly and said something to the effect of, "Fine, just (expletive) shoot me." The suspect began arguing with officers and slowly walking toward them but failing to put his hands on his head.

Paramedics responded to remove the Taser probes and examine his leg for any injury from the beanbag round.

The suspect was arrested and charged with Domestic Violence-related (mandatory arrest) charges of Assault in the Fourth Degree, Harassment and Menacing.