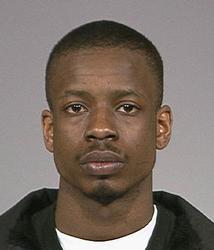 On October 13, 1999, at approximately 4 am, 911 received calls from occupants of homes in the 6200 block of N. Kerby Avenue regarding shots fired.  Portland Police Officers responded to that location and discovered a white Mazda 323 parked at the curb.  The responding officers noted that the passenger door of the vehicle was open and they could see that a person was in the driver’s seat.

Upon further investigation, the officers discovered that the person in the driver’s seat was secured there with the vehicle shoulder and lap belt.  They could also see that this person was deceased.  Homicide detectives were called and responded to the scene.

Homicide detectives also observed that the passenger door of the vehicle was open. They noted that the driver's side door window was shattered.  The detectives were able to determine that the victim was Terrence Andre Norris, a 28-year-old African-American man.  He was wearing a red hat, a dark blue coat, light blue sweatpants and tennis shoes.  An autopsy determined that Mr. Norris died of multiple gunshot wounds most likely originating from the passenger seat area of the vehicle.