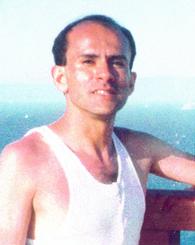 On March 25, 1999, Central Precinct Officers were summoned to an apartment building in the 2100 block of NW Davis Street by the manager of the apartments.  When the officers contacted the manager, he told them that there was a “foul odor” emanating from Apt #106.  He also told them that Apt 106 was rented to a subject named Sven Gomez.

The manager let the officers into the apartment and as they searched, they discovered the partially decomposed body of a male.  They were unable to determine at the time if it was the body of Sven Gomez.  The person that was found in the apartment presented in such a manner that the officers immediately contacted Homicide Detectives.

Homicide detectives responded, searched the scene and attended the autopsy of the found body.  The autopsy revealed that the person died of asphyxiation.  The body was identified as Sven Rodriguez Gomez.

Sven Gomez was a 32-year-old Hispanic male immigrant from Columbia, South America.  Investigators believe that he was last seen alive on March 17, 1999.  He was employed as a bus boy at a nearby restaurant.  He was openly gay and frequented bars in downtown Portland.