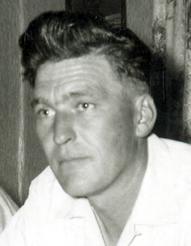 On July 3, 1970, a Broadway Cab driver saw Leroy David Flisram at about 6 a.m. with his face covered in blood, walk to a parked vehicle, get in the vehicle and then collapse on the front seat. The cab driver could tell Mr. Flisram was seriously injured and he called the police. Mr. Flisram was transported toMultnomahCountyHospital(now OHSU) where he died from his injuries on July 8, 1970.

The police were able to determine the vehicle, a blue, 1960 2-door Mercury, belonged to Mr. Flisram. It was parked in the area of SW Salmon Street/SW 2nd-SW3rd Avenue when the cab driver saw Mr. Flisram get into it. From the police investigation, it appears that Mr. Flisram was attacked, beaten and robbed, and had wandered disoriented in the downtown area before returning to his vehicle.

Mr. Flisram was a 48-year-old white male, 6’2”-6’3” tall, weighing 220-240 lbs. According to his son, he was discharged from the Army because of complications from a previous injury he sustained while working as a logger. He was also blind in one eye from an industrial accident. He was also reported to have been a police officer in Tillamook. Although he had alcohol problems for many years, the last months of his life he had worked to get other alcoholics into AA.