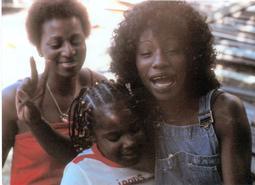 On December 21, 1981, Kevin Thomas and his mother were concerned about the welfare of his sister, Karen Andrea Thomas.  Ms. Thomas had not had any contact with her family since leaving their residence on December 18th.  This was very unusual.  Karen had been staying in an apartment in the 4900 block of NE 7th until she moved back with her mother and step-father in mid-December.

Sensing something was wrong, Kevin went to Karen’s old apartment.  With the landlord assisting, he was able to enter the apartment where he found Karen’s body.  She had been stabbed to death.  Detectives interviewed Karen’s family and a number of Karen’s friends and acquaintances.  They learned that she had a three-year-old son and had changed her lifestyle since his birth.  At the time, Detectives were unable to develop any suspects in her death.

Sixteen years after Ms Thomas’ death, a subject contacted Detectives with information regarding that death.  As a result of this information, a person named Johnny Moore, an African-American male born in 1948, became a person of interest in this homicide.  Mr. Moore is now deceased, dying of an apparent drug overdose in 2004.

Investigators are looking for people who knew Johnny Moore and had conversation with him regarding statements he may have made about the death of Karen Thomas or the deaths of any females he may have been associated with. Any information of this sort would assist in closure for Karen Thomas’ family.