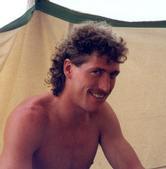 During the early morning hours of October 31, 1993, two suspects forcibly broke into an apartment in a complex located at 10576 SE Cherry Blossom Drive. The two suspects, who were both armed, confronted the apartment residents in the bedroom. The suspects, who both had their faces covered, were shouting that they were the police. During the confrontation with the victim, multiple shots were fired and Keith David Roby was shot and died at the apartment. Also present in the bedroom was the victim’s girlfriend during the confrontation and firing of the gunshots. She was not injured.

The suspects were described as white males, one approximately 30 years old, 6’1” with a medium build and the second one in his early 20’s, 5’8” to 5’9” with short, dark blond hair. Their faces were covered with bandannas. The victim’s girlfriend said she did not know why the suspects came into the apartment, but robbery may have been the motive for the home invasion.

Keith Roby’s family feel that marijuana trafficking may have played a part in the home invasion and killing of their loved one.