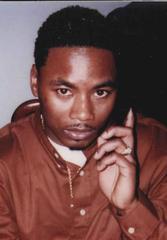 On September 28, 2000, at about 3:15pm, a father and his adult son were together at a vehicle parked outside a relative’s residence in the 4700 block of N. Congress Avenue. Various witnesses saw a suspect approach the father, Myron Dean Govan and his son, Darius Mendel Martin, open fire on them and then run from the scene. Mr. Govan was pronounced dead at the scene. Mr. Martin was transported to Emanuel Hospital, where he died several hours later.

The suspect was described by the witnesses as an African-American male, 20-30 years old, 5’9”-6’ tall, 180-200 pounds with either a short afro or his hair pulled back and wearing gloves. The victim’s had just left the relative’s residence and there was no indication of a dispute between them and the suspect before the shooting. A vehicle possibly associated with the suspect was described as two-tone, silver over dark blue ’85 – ’87 Chevrolet Astro van.

There were multiple witnesses who saw the suspect before the shooting and running from the scene. The detectives who investigated the homicides believe there are people in the community who know who the suspect is and why he shot the victims.

The family and loved ones of Myron Govan and Darius Martin are still waiting for answers and justice.