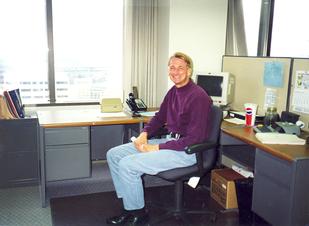 On January 6, 1997, at approximately 7 pm, Sean Tahtinen went to his brother’s apartment in the 106th block of NE Wygant to check on him. He had last talked to his brother, Dean Owen Tahtinen, on January 3, 1997, and was supposed to give Dean a ride to the airport on January 5. When he did not hear from Dean on January 5, he assumed that Dean had taken a cab to the airport. Dean worked for Wells Fargo Bank and was flying to Arizona as part of his employment.

On January 6, Dean’s supervisor from Wells Fargo Bank contacted Sean and inquired about Dean, as Dean had not arrived in Arizona and had missed work. This was very unusual for Dean.

When Sean opened Dean Tahtinen’s apartment door, he found his brother dead.  He then left the apartment and called the police.

Detectives were able to determine that the last time Dean Tahtinen was seen alive was on the evening of January 4, 1997 at approximately 7 pm. Dean was drinking at a bar called CC Slaughters. Dean was known to frequent that establishment. He was not seen leaving with anyone.

An autopsy revealed that he died of homicidal violence.