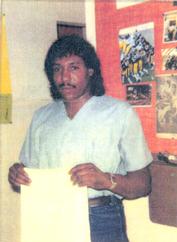 At approximately 6:30 am on the morning of June 14, 1993, a man driving to work saw what appeared to be a man sleeping in the bushes near NE 33rd and Marine Drive. The man drove down to the location of the body and saw that the victim was dead. The victim, Warren James Ogden, a 44-year old African-American man, had died as the result of apparent stab wounds. Mr. Ogden was last seen just after midnight by an acquaintance in the area of NE Stafford and Rodney.

Mr. Ogden’s late model, dark blue Honda Accord was found later that day in the area of NE 8th and Holman Street.

Warren Ogden was unmarried, lived alone, and had no record of criminal activity or drug use. It was reported by many that Mr. Ogden dated multiple women at a time, some he met through dating services and personal ads.