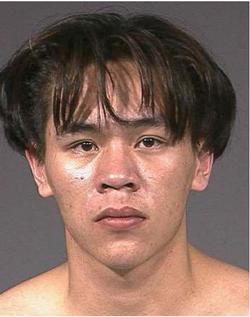 On September 23, 1996, at about 9:35 p.m., Officers responded to 5810 NE Sandy Boulevard (Viet Ha Restaurant), to the report of a shooting. Upon arriving in the area, the Officers found the victim, Phong Ngoc Truong, a 20-year-old Asian male, lying on the sidewalk in front of the Viet Ha Restaurant. Mr. Truong was deceased from an apparent gunshot wound.

Witnesses reported seeing an Asian male running from the scene shortly after they heard the shots fired. This male was described as an 18- to 25yearold, 5’6” to 5’7” tall, 140 to 150 pounds. The suspect was wearing a black baseball hat, with a black mid-length coat with a white T-shirt underneath, and wearing dark knee length shorts. He was last seen running southbound on NE 58th Avenue.

Witnesses also reported seeing a vehicle leaving the area shortly after the shots and believed the occupants may have witnessed the shooting. This vehicle was described as a Mercury Caprice, mid-1980’s, with something dragging from under the vehicle possibly the muffler. It was also reported having a black horizontal stripe between the rear tail lights.