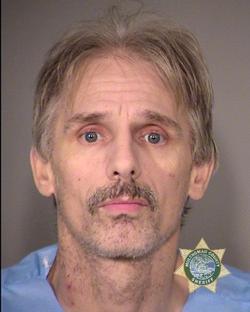 On the afternoon of Sunday, May 17, 2015, Central Precinct officers responded to the report of a man leaving a home in the 3900 block of Southeast 14th Avenue after cutting himself with a knife. As officers were responding, additional information was broadcast that the man was 47-year-old Michael Shawn Harrison, that he was armed with a steak knife, and that he was upset over a pending divorce.

A resident in the 1500 Block of Southeast Boise Street then called to report that a male armed with a knife and blood on his hands had broken into her house and she was hiding in the basement with two young children.

Officers arrived in the area of the home on Boise Street and contacted the woman by phone and were able to evacuate her and the two children out the rear of the home. Neither she nor the children were injured by Harrison. The woman later told investigators that when Harrison saw her in the home, he asked her, "Are the children home?"

Additional officers began establishing containment in the area of the home, observing Harrison inside the victim's home. Harrison exited the woman's home, armed with a kitchen knife, and sprinted toward officers, who were across the street.

Harrison continued running after the shots were fired, and ran between Officer McKay and Sergeant Padilla, slamming into the side of a house. Officers were able to quickly take Harrison into custody after a brief struggle. Medical personnel, who were in the area on standby for the initial call, were able to quickly provide medical aid and transported to the hospital. Harrison was released from the hospital and on June 5, 2015, he was indicted on charges of first-degree burglary, unlawful use of a weapon and menacing.

On June 11, 2015, a Multnomah County Grand Jury ruled that the shooting was justified.  On September 14, 2015, Harrison pleaded guilty to unlawful use of a weapon and menacing, and was sentenced to 60 days in jail.