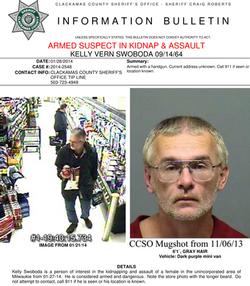 On March 12, 2014, around 4 p.m. Portland Police Officer John Romero, an 8-year veteran assigned to the Youth Services Division, and Central Precinct Officers Sze Lai, a 22-year veteran and Edgar Mitchell, a 9-year veteran, were in the Hillsdale area, near the Hillsdale Library, looking for a suspicious male driving a van.

Central Precinct and the Youth Services Division had taken reports of a suspicious male driving a green van in the area of Wilson High School. In response to these reports, officers were providing extra patrol in the area, and had been working with area schools on getting information to students and parents.

A 9-1-1 call had reported the van possibly could be in the area and Officer Mitchell, who was first to arrive, observed the van and its driver on S.W. Dewitt, but the man did not match the description of the driver.  The man told Officer Mitchell he was going to visit the library.  After he departed, Officer Mitchell observed the back and front license plates of the van were different and the front one included numbers that were reported to be associated with the van.

Officer Romero gave numerous commands to the man, but he kept walking, ignoring the officer.  The man stopped and during the course of the encounter, but would not take his hand out of his pocket. After several commands to do so, the man fired at Officer Romero, striking him in the arm and hand. Officer Romero returned fire and took a position of cover. Responding officers rendered Officer Romero medical aid while others approached the downed suspect with a ballistic shield. Medical personnel checked the suspect and confirmed he was deceased. A firearm was found near the suspect.

The suspect was later identified as 49-year-old Kelly Vern Swoboda, who had a warrant for his arrest for robbery, and was also a suspect in bank robberies and other crimes in multiple jurisdictions. He was also a suspect in a kidnapping and attack that occurred in January 2014. It was later determined Swoboda had been stalking girls in multiple jurisdictions, and Portland Police Detectives confirmed that the suspect was also the person involved in the associated reports of a suspicious van following kids.