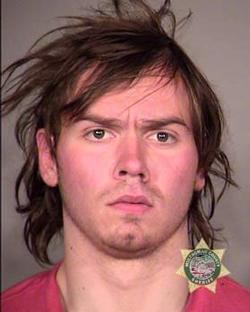 On Thursday June 12, 2014, at 6:03 a.m., East Precinct officers responded to Southeast Foster Road at 104th Avenue on the report of a pedestrian robbery.

East Precinct Officers Robert Brown, a 15-year-veteran of the Portland Police Bureau and Matthew Nilsen, an 18-year-veteran of the Portland Police Bureau, responded. Upon arrival, the officers spoke to the male adult victim and learned that the incident was an assault rather than a robbery and the victim provided information on where the suspect was last seen in the area. The victim did not require any medical attention as a result of the assault.

A short time after speaking with the victim, the officers located the suspect along the Springwater Corridor, just south of Foster Road.

Officers made contact with the male adult suspect, later identified as 23-year-old Nicholas Glendon Davis. Without provocation, the suspect attacked the officers while armed with a large metal crowbar. The officers, who were in very close proximity to the suspect, began backing away from the suspect in an attempt to disengage him and to create distance between themselves and the armed suspect. Officer Brown fell backwards as he tried to create distance and the suspect continued to advance, swinging the crowbar.

Officer Brown fired a handgun, striking and killing the suspect. Officers called for immediate cover and medical personnel to respond to the scene. Neither officer needed medical attention at the scene as a result of the attack.

On July 2, 2014, a Multnomah County grand jury found that Officer Brown was justified in the use of deadly physical force.